Madhuri Dixit who is all set to impress us with Karan Johar’s Kalank has been doing rounds of media interviews. She is usually pretty reticent when it comes to talking to media but she has a couple of movies coming up and therefore has been promoting them. Madhuri recently spoke to media about the late actress Sridevi. The veteran actress was first offered the role in Kalank but after she passed away, Madhuri took over opposite Sanjay Dutt. The ‘Dhak Dhak’ girl spoke about her last meeting with Sridevi. She said that she met her at Manish Malhotra’s function where they exchanged notes about their health, family and kids. Sridevi had come with her two daughters Janhvi and Khushi and seemed content. Madhuri said that it is very important to hold on to your family and kids because you never know what happens in life. 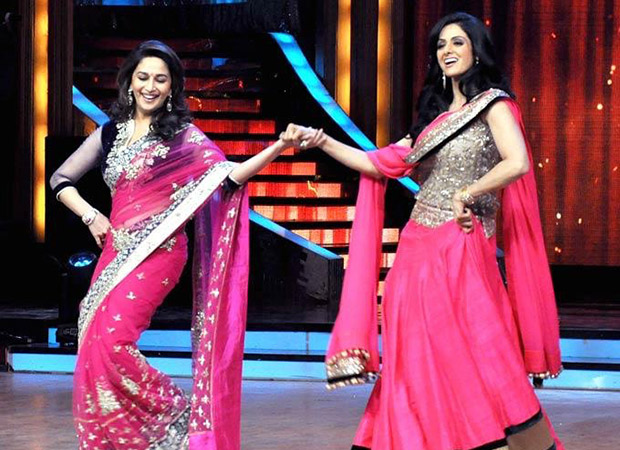 Madhuri will also be seen in Total Dhamaal with Anil Kapoor after a hiatus of decades! Anil and Madhuri were known in the nineties for their crackling chemistry and they are set to repeat this with Total Dhamaal. The movie has a huge star cast including Ajay Devgn, Arshad Warsi, Javed Jaffery and Riteish Deshmukh.

In Kalank, she is playing a courtesan and has many Kathak scenes. It would be great to see her in an old school vibe with none other than Sanjay Dutt with whom she had intense on screen and off screen chemistry back in the late 80s and 90s.

Also Read: Who will direct the Sridevi bio-pic?