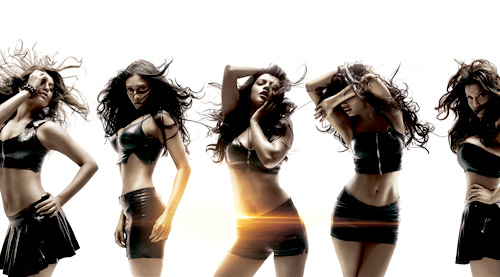 Ok, so these may still be early days, but if a minute and a half long teaser of Calendar Girls is any indication, filmmaker Madhur Bhandarkar seems to have got it right once again. There is one factor that distinguishes him from other filmmakers and that is the kind of research and authenticity that he brings to his subject before he converts it into a motion picture. One look at the visuals of Calendar Girls, and you do realize that he knows what he is talking about.

For a film that deals with Calendar Girls, the least one looks forward to is glitz, glamour and grandeur. Now that is quite visible in this teaser as well which doesn't feature any dialogues but still manages to leave an impact, courtesy its strong visuals. It is quite visible, in a literal sense, that Madhur has made sure to lend his film a classy appeal with good looking frames without compromising on the authenticity that is much needed for an 'expected' shocker affair like this.

So the teaser, as expected, begins with a solo shot each of Akanksha Puri, Avani Modi, Kyra Dutt, Ruhi Singh and Satarupa Pyne, the five debutants. Though the nature of the film requires them to come across as hardcore seasoned models, rest assured they would be pretty much required to get into an act as well. With each of them bringing in their core quotient of going glam, one gets to see quite a few stunning visuals. The ones that stay etched in memory are a) a girl lying on beach with a butterfly pattern around her, b) the waterfall shot and c), the one towards the very end when the five girls walk together in red.

Since the teaser doesn't have any dialogues, the onus was on getting the background score perfect and this is where relative newcomer Rohit Kulkarni (Mary Kom) comes in handy, who delivers an impressive dramatic score that is totally in Madhur Bhandarkar's territory. You do get a good hang of what the film is all about with the music elevating the proceedings and visuals warranting that Calendar Girls turns out to be a big screen watch.

As for the expected high drama in the film, elements like gambling, IPL and businessmen-exploiting-women are thrown in as well, which further assures one that there would be a lot more to Calendar Girls than just models on the ramp.

All in all, a promise of a quintessential Madhur Bhandarkar film which would make a lot of noise before and on its arrival for sure. One looks forward to the full-fledged trailer now to see how the plotline of the film unfolds!