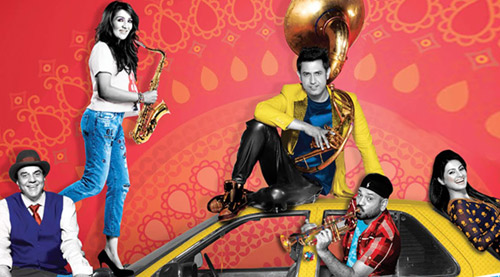 Second Hand Husband releases tomorrow and one keenly awaits the launch/comeback of its lead actors. While Gippy Grewal makes his Bollywood debut, Tina gets to realize her dream of being seen on the big screen as a leading lady. Meanwhile Geeta Basra, who was last seen as a lead opposite Emraan Hashmi in The Train (2007), makes her comeback too as a leading lady in this film directed by Smeep Kang, who is also making his debut as a Bollywood director after delivering Punjabi successes like Carry on Jatta and Lucky Di Unlucky Story (both of which had Gippy as the leading man).

Meanwhile, much is being said about the two leading ladies, Tina and Geeta, and their apparent on and off screen duel. As is the case with two heroine films, there is competition for sure, though those connected to the film vouch for the fact that there was no ill-will on display, at least during the making of the film.

Informs our source, "There is actually no competition as such between Tina and Geeta as they are both playing two totally different characters. Everyone in the film, be it Gippy, Tina, Geeta, Sanjay Mishra, Vijay Raaz, Deepshikha or Ravi Kishan has come together to make this comedy film really humorous and make the film what it is. You can't have this film without any one of these characters. It is not a run of the mill love story; it is a different concept. Everyone has his or her own story going in there."

The source further reveals that there is nothing to be read between the lines as Tina and Geeta have only two scenes together.

"Tina is a nice girl, she is from a filmy background, she understands this line since she has been born and brought up here. It is understandable though that it must be nerve wrecking time for her as this is her debut film. Every actor goes through it as your debut is the passport in the industry. In any case, she has a great support system around her (in the form of her dad Govinda) and she would do well," the source adds.

As a matter of fact, what both leading ladies are looking forward to is their on-screen chemistry (or the lack of it) with Gippy Grewal. So while Tina gets to romance Gippy on screen, Geeta hunts for a new husband for herself with help of her current husband (Gippy), something that leads to hilarious situations.

Laughs Geeta, "Guess what, this 'jodi' has no chemistry, no attraction, at all. At best, it is just cordial relationship. They just deal with each other because they have to. They both argue, they get irritated with each other aur isi mein hi audience ke liye mazaa hai."

We look forward to how it actually entertains the audience.

Exclusive: Neha Sharma is looking for her…