The trailer of Dinesh Vijan’s Luka Chuppi has just dropped and we are sure impressed with the storytelling, hilarious dialogues and the chemistry between the ‘fresh’ pair Kartik Aaryan and Kriti Sanon. While Luka Chuppi is all about a couple daring to opt for a ‘live-in’ relationship in the hinterlands of the country. The fun trailer shows how Kartik and Kriti are forced to live in with their parents and fake marriage. This concept is not new to Bollywood. Before this, there have been movies made about this relatively ‘hip’ cultural phenomenon but here’s what has changed in its portrayal over the years. 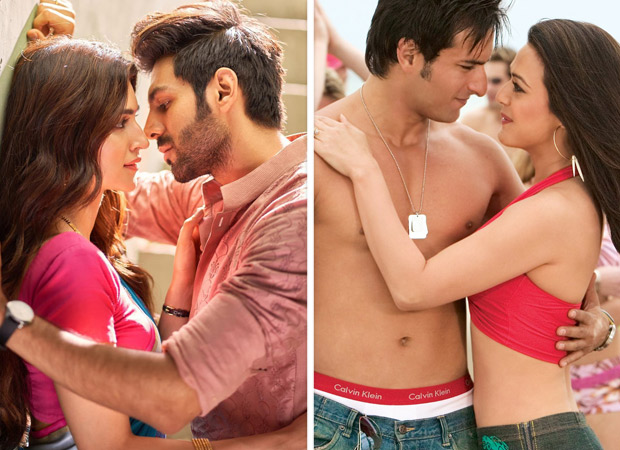 Salaam Namaste was arguably the first film made where the leads Preity Zinta and Saif Ali Khan stayed in a live-in relationship, far away from home in Australia. The subject was considered ‘bold’ about 12 years ago when the film released and it showcased Preity’s character getting pregnant in the film and there was a whole portion where the female lead when through guilt to terminate the unplanned pregnancy and even called herself ‘selfish’ to choose her own life sans family and not marry. In the end, the male lead played by Saif graciously accepts the mother and her babies and proposes to her for marriage. It is very interesting here to note that the makers chose a very ‘western’ milieu to tell their tale and stressed upon the significance of marriage, as an eventual progression to a live-relationship.

Stark contrast to Salaam Namaste, this Ranbir Kapoor slice of life film which released in 2009 showcased Ranbir and Konkona Sen Sharma’s characters staying together but only as friends. Everything about their arrangement was ‘platonic’ in the beginning. In the Ayan Mukherji’s film, the characters found themselves while getting to know each other in a very romantic, yes, but in a bit of a vanilla manner which worked very well for the narrative, overall. Interestingly, again, the film was set in Mumbai and highlighted lives of urbane, upper-class youngsters going through a bit of an existential crisis.

Cocktail, which came three years after Wake Up Sid was also set outside India and targeted the diaspora living in London. While this film was a game changer of sorts for Deepika Padukone, the plot was largely based on love and friendship shared between the three leads: Saif Ali Khan, Deepika and Diana Penty. Essentially a love triangle, the Homi Adajania directorial traces the changing equations between the male lead and the two female leads after they start living together. The film starts off with Saif and Deepika living together, romantically till their equations change after a third person is introduced. Marking pattern here, even Cocktail was set far away from the country and thus implying that the idea of live in in the core parts of India still was unthinkable.

Things changed drastically after Yash Raj Films’ Shuddh Desi Romance came out in 2013. No longer did the makers need to show glitzy foreign or urban locations to showcase this concept. For the first time, a film about live-in was made which was extremely rooted, just like its name suggested. The main characters of this Sushant Singh Rajput, Parineeti Chopra and Vaani Kapoor starrer lived and behaved like us. The film was set in a two-tier town in Rajasthan and was very earthy in its appeal. This is was a clear game changer in the approach of ‘New India’ where the significance of marriage was not stressed nor were the female characters made to feel any guilt over pre-marital sex or living in without the ‘license’.

Mani Ratnam’s Hindi adaptation from his Tamil hit Ok Kanmani again had a different take on this concept.  The young couple who prioritize their careers over marriage decide to live in, but with an older married couple. Ratnam tries to bridge the generation gap by showing a young couple trying to evolve in their relationship in their own way, under the approval and guidance of an old married couple. Even this film is set in Mumbai, and the end sees the two leads getting married.