Last Updated 06.10.2022 | 7:37 PM IST
feedback language
follow us on
Bollywood Hungama » Movies » Movie Reviews » Luka Chuppi Movie Review: LUKA CHUPPI is a funny take on the modern relationships with dollops of funny moments. This clean comedy would get thumbs up from the youngsters and family audiences. Recommended!

Luka Chuppi Movie Review: LUKA CHUPPI is a funny take on the modern relationships with dollops of funny moments. This clean comedy would get thumbs up from the youngsters and family audiences. Recommended.

The 2005 film SALAAM NAMASTE is credited for making the idea of live-in popular in India. It’s been nearly 14 years since the film released and although live-in is a known concept by now and we have also had a few more films on this topic, it’s still considered a taboo in many places, including in some progressive urban areas of the country. Hence, to show a couple living-in in a small Uttar Pradesh town secretly can make for a fun and entertaining watch. Cinematographer-turned-director Laxman Utekar's debut Hindi film LUKA CHUPPI explores this aspect. Moreover, it stars Kartik Aaryan and this is the actor’s first film after the much loved and successful flick SONU KE TITU KI SWEETY. So does LUKA CHUPPI manage to provide entertainment in abundance? Or does it fail in its endeavour? Let’s analyse. 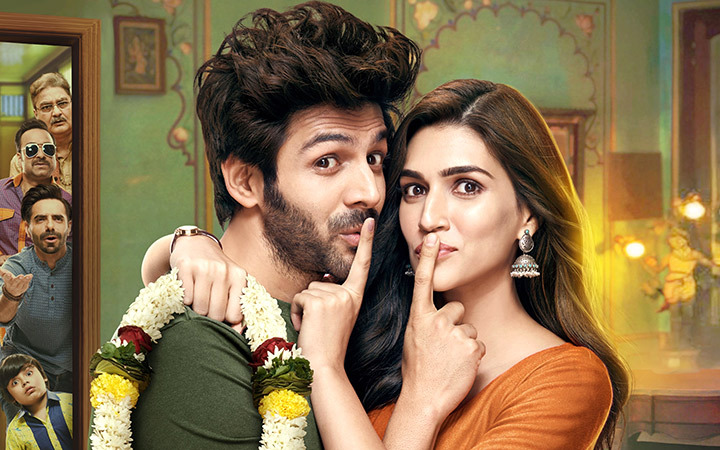 LUKA CHUPPI is the story of a couple living-in with their family. Superstar Nazim Khan (Abhinav Shukla) gets into a controversy when it comes to light that he is living-in with his girlfriend and is unapologetic about it. The moral police come out in full force to protest against his 'indecent' act. One such organisation is Rashtriya Sanskriti Manch and in Mathura, it is led by Vishnu Trivedi (Vinay Pathak). His daughter is Rashmi (Kriti Sanon) and she joins a local news channel after completing her media studies in Delhi. Here she bumps into Guddu (Kartik Aaryan) and both fall in love. After a fight with his elder unmarried brother Vikas (Himanshu Kohli) and brother in law Babulal (Pankaj Tripathi), he decides to tie the knot ASAP. He proposes to Rashmi. She however refuses to marry him so soon and insists on a live-in relationship. Guddu obviously freaks out. However inspired by an idea given by their colleague Abbas (Aparshakti Khurana), they decide to live in when they go on a 20-day assignment at Gwalior, where no one knows them. Hence they could live in without any fear. But in order to get the flat on rent, they pretend to be a married couple. Rashmi also has to go out wearing mangalsutra and apply sindoor. All is going well when Babulal catches them getting cosy in a public place. Assuming they are married, he tells his family about it and they all land up at their pad in Gwalior. What happens next forms the rest of the film.

Rohan Shankar's story is novel and entertaining and different from other such films in this genre. The characters are very well fleshed out and most importantly, they are relatable. Rohan Shankar's screenplay is effective for most parts and evokes the right humour. At some places however, it is a bit weak, especially in the first half. In the attempt to establish the setting and the dynamics between the characters, the writer seems to have done a bit of a rushed job. On the positive side, a few scenes are exceptional and would surely be loved. Rohan Shankar's dialogues are funny. Thankfully, there are no dialogues with double entendre.

Laxman Utekar's direction is good but could have been better. The script gets a bit off in the first half and his direction does not do much to polish the minuses. But he gets better as the film progresses. One of the best parts of the film is how it addresses a taboo topic and yet makes it mainstream. In the past, we have had films based on live-in like say OK JAANU [2017] but it was a niche product as majority of the country just couldn’t relate to it. Laxman however executes the plot well and the message comes out loud and clear. As a result, this film has a wider appeal and thanks to humour and treatment.

LUKA CHUPPI begins on a surprising note, showing the Nazim Khan controversy. It makes it clear that besides being a comedy, it’s also going to make a social comment. Audiences however will go by the trailer and they expect to see romance and some dash of situational fun. And they definitely get that once the characters get introduced. At the same time however the film takes a while to get into its element. The falling-in-love happens quite quickly. The way the equation between Guddu with Vikas and Babulal is established seems forced. In fact the dream sequence where Guddu imagines that his nephew Chiku is getting married falls flat. It’s in the scene where the Gwalior neighbours create a havoc is when the film picks up. This particular scene is quite hilarious and even heroic and will be greeted with claps. The intermission point, when Guddu-Rashmi’s ‘luka chuppi’ gets exposed (though not entirely) is also quite entertaining. Post-interval, the film gets even better as Guddu and Rashmi pretend to be married when they are not. The sequence at the temple is quite impressive, especially when it brings a new angle into the film. Guddu-Rashmi attempting to get married in their house is touching and yes, guffaw-inducing. The best however is reserved for the finale. Usually, comic capers tend to go all over the place. Fortunately in the case of LUKA CHUPPI, it doesn’t happen and it ends on a good note.

Kartik Aaryan once again is in a great form. His boyish looks work instantly but it’s his performance that makes it even more endearing. In one scene in the bedroom with Kriti and Aparshakti, he does go into the ‘monologue’ zone but quickly composes himself. His silent, deadpan expressions, especially in scenes when his family members are calling him names, are quite hilarious. Kriti Sanon has a fantastic screen presence and maintains a strong position. She also surprisingly shines in an important emotional sequence in the second half.  Aparshakti Khurana as always is dependable. The prejudice that others have towards his character’s religious identity is quite hard hitting. Pankaj Tripathi’s humour seems forced initially but later, it’s him who raises the maximum laughs. Vinay Pathak is a revelation. Till now, he has been associated with funny and light roles. But in this film, he plays a role of a dreaded politician and he looks very convincing. Himanshu Kohli is the surprise of the film and his character helps a lot in adding to the humour quotient in the film, especially post-interval. Vishwanath Chatterjee (Guddu's brother Varun) and Neha Saraf (Guddu's bhabhi Janki) also get a chance to make their presence felt. Chiku (Master Samarth) is adorable. Sapna Sand (Mrs Srivastava) is good as the nosy neighbour in Gwalior. Ajit Singh (Srikanth) is irritating as Vishnu Trivedi’s sidekick but that was the idea as his character has a villainous tinge. Atul Srivastava (Guddu’s father Badriprasad) and Alka Amin (Guddu’s mother Shakuntala) are decent. Abhinav Shukla is okay and ideally, the makers should have cast a superstar in his place.

There are only recreated songs in the film which is a first. 'Poster Lagwa Do', the biggest song of the film, is shockingly missing from the film and is played during the end credits. This might disappoint its fans. 'Coca Cola' is also played during the end credits and its foot tapping. 'Photo' and 'Duniyaa' are fine while 'Tu Laung Main Elaachi' is melodious. Ketan Sodha's background score has a funny touch that instantly make the proceedings light-hearted.

On the whole, LUKA CHUPPI is a funny take on the modern relationships laced with dollops of situational and funny moments. This clean comedy would get thumbs up not just from the youngsters but also from the family audiences. Recommended!

Kartik Aaryan makes it huge on TV with Luka Chuppi

Updated on May 28, 2020 02:52 AM IST
Bollywood Hungama News Network https://www.bollywoodhungama.com/