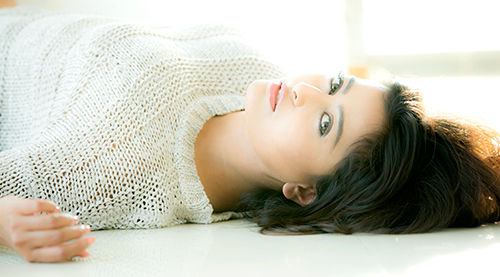 Direct Ishq hits the screens today. The film would also bring back Nidhi Subbaiah on screen, the leading lady who had impressed in Ajab Ghazab Love (2012), her debut film as a leading lady in Bollywood. A popular name down South, this Mysore girl is known for her bubby and vivacious appeal. Now the same is expected to be the case in Banaras set Direct Ishq as well, which has Rajniesh Duggall and Arjun Bijalani vying for her attention.

The film is set in Banaras and comes with the right authenticity of the place. Looks like you spent quite some time there to make it come right on screen.
Yes, it was my first time in Banaras. The way people interact, the way they talk, I added that all to my dialogues. I was truly taken in by the city. It is so nice and the vibration of the place is something else. I would sit in between shots, look around and realize this is where Dolly Pandey (my character in the film) must have grown up.

How was the support from the locals?
It was good and at times funny (laughs). Local people out there love to pass comments. So even when we were doing the scenes, there used to be cat calls and boys out there used to pass comments. Anyways, I enjoyed it all as I am kind of used to working in such conditions due to my experience down south. There too when you are in villages or remote places, such things happen. During Direct Ishq, there were times when such comments were distracting, especially when you are doing emotional scenes. I just used to filter out those voices. Maine socha bass sunna hi nahi hai ki kaun kya bol raha hai (smiles).

Audience is listening to a lot of your songs from the film though, as there are half a dozen of them.
Oh yes, I am there in every song. There are six songs and each of them comes with a different emotion. There are rock songs like 'Ganga Maiyya' and 'Toote Taare' while I really love the romantic number 'Nimboo Sa Ishq'. This was a good opportunity since I have such a meaty role in the film. The story revolves around Dolly Pandey.

Guess you have both Ranjiesh Duggall and Arjun Bijlani trying to woo you in the film?
When I was told that Rajniesh was playing the role of Bicky, my first reaction was - 'Oh, but he is such a sweet and nice guy in real life'. He really prepared for the film and was just up there as a hot headed temperamental guy. He is one of the nicest people I have met in the industry so far. He is a very good co-star and always gives good reactions. I guess our chemistry has worked out really well. As for Arjun, I met him on the sets. It was brilliant to be interacting with him. He made me laugh and blush. Actually, he is quite naughty and all the fun and pranks used to happen through him. He was up for it all the time.