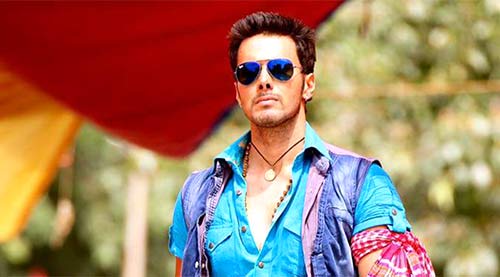 Last year, he was seen in Ek Paheli Leela where he had Sunny Leone as the leading lady opposite him. In the film, he played a simpleton from the era gone by. Circa 2016, and Rajniesh Duggall is happy to be shedding his good boy image and turning grey for Direct Ishq. As a Banaras ka ladka Bicky Shukla, he literally made sure that he wasn't asked to play a nice boy again (a role that went to Arjun Bijlani) and instead showed his different side in the Rajiv S. Ruia directed film.

"When the film came to me, I was about to get into a reality show. At that time, Rajiv and (writer) Turaz bhai came to me for narrating the script. I had earlier done a guest appearance for Rajiv's Main Krishna Hoon and he had said that whenever he would have a good film in hand, he would make it with me. Then Turaz started narrating the film and all this while I was wondering whether they would offer me the part of Kabir Bajpai or Bicky Shukla," reminisces Rajniesh.

His doubts came true when Rajiv and Turaz told him that they were looking at locking him for the part of Kabir as they were talking to others for playing Bicky.

"I told them that since I was looking for a challenging role, I could continue the conversation only if they roped me in as Bicky," smiles Rajniesh, "They wanted me to be really sure if I opted for that part since it was going to be pretty challenging. I assured them that I was game for the part. After all, it is fun to be playing a 'desi dabangg' loud guy. There is nothing wrong with the role of Kabir. It is just that I have done soft roles like these before and hence wanted to challenge the actor in me now."

The film has him and Arjun Bijlani (who eventually stepped in as Kabir) woo Nidhi Subbaiah - who plays a wannabe rockstar Dolly Pandey - in their own way.

"The backbone of the film is the love story," says Rajniesh, "The minute the character Bicky comes into the life of Dolly Pandey, it is about seedha pehli nzar mein direct ishq. So mesmerized is Bicky with Dolly that whenever he sees her, he would do something strange. He also has a habit of talking about Shivji Mahadev, so besides the girl whenever he talks about love, he talks only to Mahadev. As for Nidhi, I was very comfortable with her. We met for the first time only during the film's making. Her character is more of a tomboy and she has done really well. She fits into the Bollywood scheme of things."

As for his own part, he made sure that he had something special to offer.

"Turaz and I really worked on the character," informs Rajniesh, "Since it is really loud, we could add a lot more to it. One thing that we did was to give him a punch-line after every dialogue. It built on to the character and came in really handy each time around there was some love, comedy, drama or action."