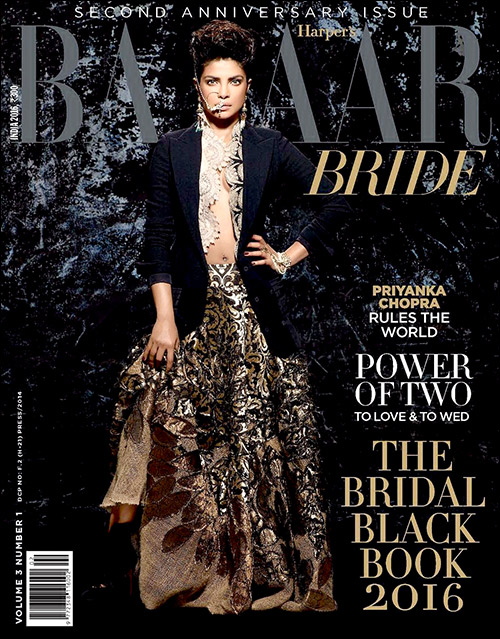 Juggling between Hollywood, Bollywood as well as regional cinema, former beauty queen Priyanka Chopra definitely has her hands full with several of her projects underway. The actress has now turned cover girl for this month's edition of Harper's Bazaar Bride India.

As described by the editor of the magazine, Nupur Mehta, Priyanka Chopra dons the diva-meets-bride avatar with Ã©lan. The actress is seen sporting an Anamika Khanna top pairing it up with Abraham & Thakore lehenga and a formal black blazer from Dior. This indo fusion look however is accessorized with ethnic jewellery like danglers from Ghanasingh Be True, nose ring from Kishandas & Co. for Sabyasachi and haathphool from Jaipur Jewellers along with Christian Louboutin shoes. The second anniversary issue of this bridal magazine uncovers the life of Priyanka Chopra as a diva who has inspired many, especially after her recent win at the People's Choice Awards for 'Quantico' and now with her preparing for the much talked about Hollywood film debut Baywatch with Dwayne Johnson (The Rock).

On the other hand, the magazine also celebrates the Valentine month by giving the fans a sneak peek into the lives of their favourite television couples like Rithwik Dhanjani - Asha Negi, Raqesh Vashishth - Riddi Dogra, Manish Naggdev - Srishty Rode among others in Power of Two, To Love & To Wed.
Tags : Bride India, Dwayne Johnson, Harper Bazaar, Magazine, Nupur Mehta, Priyanka Chopra, Quantico