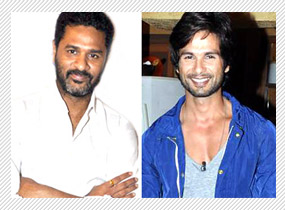 Prabu Dheva has worked with the big guns like Salman Khan in Wanted and Akshay Kumar in Rowdy Rathore and given both actors their biggest money spinners in those times. Now that he is returning to the action fold with R... Rajkumar, it is pretty much a given requirement that Shahid Kapoor, the film's lead, manages to strike it big with the film.

Promo of this Viki Rajani and Sunil Lulla production is out and one can clearly see that not just is Shahid being seen in an altogether different avtar, he is also clearly enjoying himself in front of the camera.

"For that, full credit should actually go to Shahid himself and no one else. This kind of freshness can be experienced only when a hero has total belief in you. He did everything for the film from the bottom of his heart and it was so nice to see him totally surrendering himself to my vision. Today, everyone is so happy with him, be it the co-actors, technicians or the producers," says Prabu Dheva.

While the filmmaker, despite giving some of the biggest hits in Bollywood, stays on to be his humble self, he also adds that never once did Shahid make him feel uncomfortable on the sets or location.

However, one wonders whether at the beginning of the film's shoot, Prabu Dheva was as confident about Shahid actually making the cut as an action hero. After all, though Shahid has been seen doing a lot of 'pyaar' since the days of Ishq Vishk, one hasn't seen him indulging in 'maar' except for a stray Kaminey.

Laughs Prabu Dheva, "For that you would have to see R... Rajkumar. He has not just given his heart and soul, but also his blood and sweat. Well, literally, since he got hurt so many times right through the film's shoot. As for him being the first and final choice for the film then well, just like Wanted was tailor-made for Salman Khan and Rowdy Rathore wouldn't have been possible without Akshay Kumar, R... Rajkumar couldn't have been realized for the big screen if not for Shahid Kapoor."

He goes on to add, "When you see the promos, you can say yourself that the film is just perfect for Shahid Kapoor. This is the reason why it all seems convincing on screen. See, you can fool yourself but not the audience. Moreover, while each of the men in the industry has indulged in action, Shahid has not. Him doing action is actually the USP of the film. After all, it is for the first time that a young hero is stepping into that mode. It would be a new genre for all involved."

One hopes that's indeed the case.