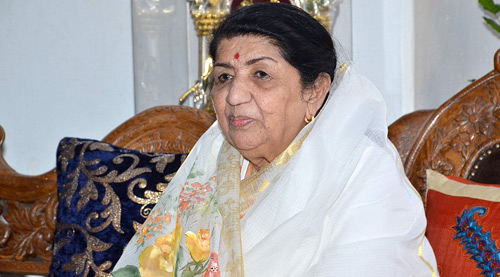 Sometimes, reputations precede you. Also, there is a flipside to everything good. Combine these clichÃ©d truisms and you realize that for all the greatness Lata Mangeshkar has achieved, she has always been known for Indianness and her aptitude for raag-daari, folk and desi melody. Now that she has turned 85 years young, it' time to change 'tracks' and show her in a new light as well!

For when we mention the word 'Western', the world shifts - in Lata's generation - to her sister Asha Bhosle, who is termed the vocal cabaret queen. Talk Lata and cabaret and ninety-nine out of hundred mention just one song, 'Aa Jaan-E-Jaan', composed by Laxmikant-Pyarelal for Inteqam (1969).

And therein lies the greatest injustice ever done to the undisputed Nightingale of India, for this nightingale extended her wings outside, and thanks to her rigorous Indian classical training, effortlessly 'conquered' the West, imbibing those songs with a melodious timelessness and almost tangibly seductive quotient, sometimes in greater quantum than in the cult number we have mentioned above.

As Lata told me once, "As long as the lyrics were not cheap or sleazy, I had no objections to cabarets, and that's what Shankar-Jaikishan and Laxmikant-Pyarelal ensured."

But again, the 'Western' Lata was not just about cabaret!

S-J got Lata to render many more Western beauties, one of the brilliant unsung ones being 'Aankhon Mein Aankhen Na Daalo Mujhe Kuchh Hota Hai' in Tumse Accha Kaun Hai (1969). The waltz 'Dil Ki Girah Khol Do' (with Manna Dey) in the 1967 schizophrenia saga Raat Aur Din, was enacted with gusto by Nargis in this home production of the actress and remains a favourite even today.

Coming to Laxmikant-Pyarelal, here was a duo that wanted Lata for every song from a child on screen to the exact opposite of a cabaret, even shelling out part of her fees from their own pockets when the producers of their early, humble films could not afford them! And in terms of quantity, Lata's work for them in this genre obviously exceeded all others because of this factor and their own prolific nature.

Inteqam itself had another magical Helen cabaret, 'Mehfil Soyi', and then we come to those twin humdingers not known to many as the films went unnoticed, the extraordinary creation that was 'Vai Vai Main Jal Gayi / Yeh Aag Hai Ya Jawaani' from the 1973 Gaddaar (filmed on the then-ruling siren Padma Khanna) and the 1984 title-track masterpiece, 'Shabnam Ka Yeh Qatra Hai' from Hema Malini's home production, Sharaara.


A masterpiece that was highly popular in its time was 'Aaja Re Piya Khilne Lage' (Baharon Ki Manzil), and so was the song that now ranks among Helen's most frothy and exotic numbers - 'Aur Mera Naam Hai Jameela' (Night In London), in which Lata sings the word 'Jameela' differently every time!

Deeply melodious as these songs were, they helped showcase the fact that Lata never jettisoned melody even in such numbers, where the fashionable done thing was concentrating on the rhythm.

L-P's peppy dance track, 'Ruby O Ruby' (with Mukesh) is also the only aspect people remember of the 1971 flop Chahat. And then we have a song that, despite its sweetness, is considered (because of the trend then and the accompanying visuals) as the only 'disco' song by the Melody Queen, 'Mere Naseeb Mein Tu Hai Ke Nahin' in Manmohan Desai's 1981 blockbuster Naseeb.

But this hue of Lata's versatility was by no means exclusive to these two music entities. Two more composers very close to Lata were C. Ramachandra and Salil Chowdhury, and the former gave her that unforgettably rhythmic 'Gore Gore O Baanke Chhore' in the 1950 Samadhi, exploring this wonderfully new shade of a performer extraordinaire, who had begun in Hindi cinema just three years earlier to this film!

Of course, the leading Western number from this composer for the singer was his own duet with her, 'Shola Jo Bhadke' from the 1951 Albela - a cult song of such stature that it ranked among the three most popular Hindi film songs of all time in a poll held in the mid-'90s!

The enviable hat-trick of C.R.-Lata excellence was their other unique Western duet, the title-track of Shin shinaki Boobla Boo (1952).

Salil Chowdhury exploited Lata in his own imaginative way - in the distinctly Western beats and ethos of the super-hit Talat Mahmood-Lata duet 'Aaha Rimjhim Ke Yeh Saare Saare Geet Liye' (Usne Kaha Tha/1960). The duo seemed to be a Salil favourite for Western numbers, for they also rendered his version of Mozart's symphony, 'Itna Na Mujhse Tu Pyar Jataa' from Chhaya in the following year.

R.D. Burman too contributed his bit with the oh-so-inviting tenor of 'Baahon Mein Chale Aao' (Anamika). The younger composers who came in during the '70s also followed suit, with Bappi Lahiri's sterling combo of 'Shama Jale Ya Na Jale' and 'Pyar Hai Gunaah Suno' (both from Paapi) and Rajesh Roshan creating gems like 'Yeh Raatein Nayi Purani' (Julie) and 'Aao Manaayen Jashn-E-Mohabbat' (Doosara Aadmi), both among the finest waltzes heard in Hindi cinema.

With Kishore, she also sang Roshan's languorously lovelorn 'Dilruba Aa Meri Baahon Mein Aa' (Yehi Hai Zindagi), and she remained the composer's choice for his desi adaptation of My Fair Lady's 'I could have danced all night' in 'Honthon Pe Geet Jaage' in that film's adaptation, Manpasand.

It is strange indeed, therefore, that none of the younger music directors, led by Jatin-Lalit and A.R. Rahman, who were more inclined towards Western music and fusion and who employed her vocals, thought of that shade of Lata Mangeshkar.

Maybe they too were under the misconception that Lata had not really won the West too, just as she has done as India's emissary!