When two actors come together and we notice some sparks, it’s surely serving some fodder for the spicy headlines for the tabloids and some good and spicy news for movie fanatics. Well, we have recently noticed Kartik Aaryan and Jacqueline Fernandez goofing around together in Budapest. But, before you jump to any conclusion, let us tell you that the two are seen together for some work commitment. 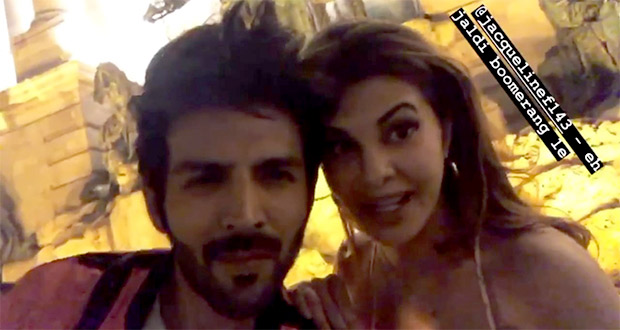 Kartik Aaryan, who is super active on social media, has been sharing some pictures from Budapest in the past couple of days. The actor didn’t reveal why he was present in the city, but he shared some amazing pictures where we saw him on the streets and also taking a dip in a pool (which got us melting).

However, Jacqueline Fernandez surprisingly shared a video from Budapest where we see the two shooting together. In the video, we see them on location, getting their hair and make-up done and just when Kartik is ready for the camera, Jacqueline accidentally hits his hair and the two can't stop laughing about it. The actress has captioned the video saying, Jab We Met, @kartikaaryan, nice to meet you. To which, Kartik in his humourous sense replied, "Quite KICKed to meet you."

Looking at the video, we are sure the two are working on something fun but don’t wish to reveal anything. But we must say that Kartik’s chemistry with Jacqueline is surely interesting.

Recently, there were reports that Jacqueline Fernandez might star opposite Kartik Aaryan in the remake of the Kannada hit film, Kirik Party. While Kartik has been confirmed, his ladylove for the film is yet to be disclosed. But if the rumours come true, we will not be disappointed, because Kartik’s pairing with Jacqueline is quite hot!