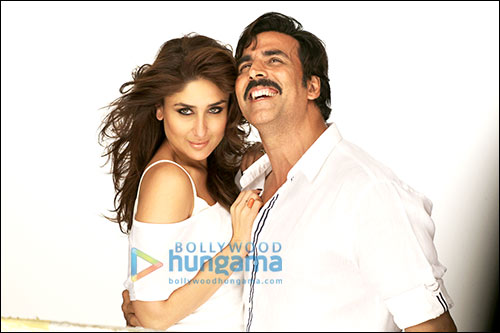 Akshay Kumar, who is currently busy with promotions of Gabbar Is Back, was seen singing praises about Kareena Kapoor Khan's song in the film. He said, "Bebo has been an integral part of my career, we've done many movies together & one can only hope we have many more to come. She is everything one could ever ask for in a Hindi film actress. Kareena will always know how deeply I appreciate her effort & expertise. I'm sure viewers are going to love her in 'Teri Meri Kahaani'. Bebo has brought a kindness to our film like no other."


Gabbar Is Back, being one of most anticipated film this summer, garnered a good response for its recently released trailer. The story focuses on an aam aadmi waging war against corruption. While Gabbar is the tough guy, he also has a soft and emotional side when it comes to his family. Akshay will be seen romancing Kareena in a soulful song, 'Teri Meri Kahaani' which happens to be the first song to be launched for this film. The song will take viewers through the emotional journey of the couple making itself indispensable to the overall narrative of the film.


Now it's a well-known fact that Kareena does special appearances only for close friends and Akshay really wanted Kareena Kapoor Khan in the film. When Shabinaa with whom she had also shot for 'Chinta ta chita chita' in Rowdy Rathore suggested it, she could not refuse and readily agreed and adjusted her dates to shoot her portion.


Excited about the song, Kareena Kapoor Khan said, "Relationships in this industry have always mattered to me and my song in Gabbar Is Back is for a friend- Shabinaa Khan. I had a great time doing a small cameo in the Rowdy Rathore song and shooting for this song was even more fun and enjoyable."


Produced by Viacom18 Motion Pictures, Sanjay Leela Bhansali and co-produced by Shabinaa Khan, Gabbar Is Back releases on May 1, 2015.