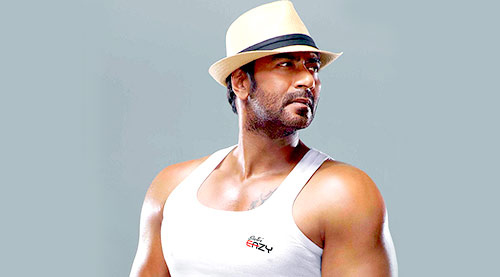 1. All his life Ajay Devgn has been a warrior. He would rather kick ass than kiss. Ajay Devgn's father Veeru Devgan is one of the leading action directors of Bollywood. Ajay inherited the penchant to kick ass from his dad.

2. Most of his closest friends are from outside the film industry from his college days. Apart from Abhishek Bachchan, Sanjay Dutt and Rohit Shetty, Devgn has no friends from the industry.

3. After Devgn's debut in Phool Aur Kaante in 1999 Abhishek's mother Jaya Bachchan was the only one who had predicted that Ajay Devgn would be a superstar. Devgn's debut defeated Yash Chopra's Lamhe at the box office.

4. Devgn can't get along with the Khan superstars, especially Shah Rukh Khan who is Devgn's wife Kajol's favourite co-star. There is no friction at home over Kajol's loyalty. She would happily give up her friendship with SRK for her husband's sake. She distanced herself from buddy Aditya Chopra when her husband warred with the Chopras. Devgn demands unconditional and complete loyalty from those close to him.

5. Devgn's rapport with Salman Khan during Sanjay Bhansali's Hum...Dil De Chuke Sanam was politely cordial. Salman wanted to 'get' Aishwarya Rai at the end. He got Sooraj Barjatya to talk to Bhansali to change the ending. But Bhansali stuck to his gun....rather, Devgn. Through all this naatak of one-upmanship, Ajay Devgn remained indifferent.

6. Ajay Devgn has never worked with Yashraj Films or Karan Johar's Dharma Productions. Devgn fired the hell out of Karan Johar recently for allegedly passing snide comments. Kajol stood by her husband in the war with Johar.

7. Best friend and favourite director Rohit Shetty's dad was also a stunt man, the renowned Shetty. Ajay and Rohit's one binding factor is their mutual affinity to upping the ante with the action with each film. Predominantly an action hero, Ajay Devgn played romantic roles in Prakash Jha's Dil Kya Kare (opposite his wife Kajol) and in Harry Baweja's Main Aisa Hi Hoon. Both bombed miserably.

8. Ajay Devgn is one of the biggest pranksters in the film industry. With him around, his co-stars are always on red-alert regarding their missing shoes, cellphones and spectacles.

9. Ajay suffers from an eye ailment that doesn't allow him to watch too many films.

10. Ajay is a terrible singer. He can't carry one single note properly. But we don't mind singing Happy Birthday to Ajay Devgn.