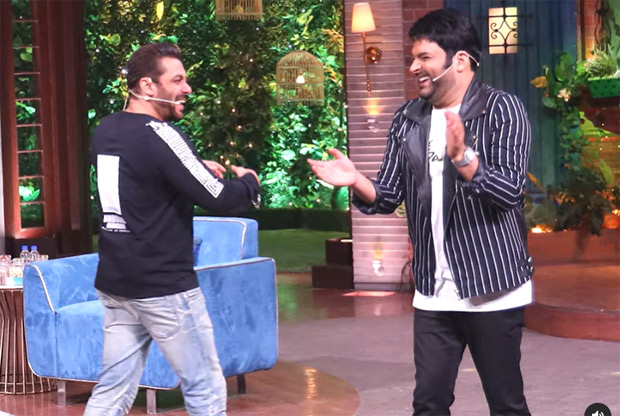 The episode began with the host Kapil greeting his guests and making small jokes here and there and giving out hints on who all will be gracing the stage of the show. He went on inviting the 'Shaan and Khan' of Bollywood, Salman Khan. A grand entry in an airplane was made and from it came out a photographer and makes the joke that Archana Puran Singh had asked him to do so that she can post it on her Instagram. After this fun segment, Salman Khan made the entry riding in a bicycle, showing his moves and he cut a cake.

When Kapil asked him that what motivates him the most, Salman said, he gets motivated by this own self and how far he has struggled and now is motivated to work 8 to 16 hrs a day. Archana then requests Kapil to sing Salman’s song ‘pehla pehla pyar hai’, Kapil invites her to the stage. While Kapil sang the melodious song, Archana and Salman danced hand in hand.

Kapil and Salman both talk about the latter’s marriage status. Kapil said that people say they are waiting for Salman to get married only then will they get married but they forget that Salman will be able to get someone whereas they wouldn’t. Salman then said that he is happy the way he is, and that looking at Kapil and his after-marriage state he would not want to be a part of one. This even made Kapil’s mom sitting in the audience laugh out hard.

Kapil then invites the next guest Ayush Sharma and he enters flaunting his dance moves. He greets everyone and goes on narrating a fun incident with Salman of his first workout with him and continued with fun incidents that they both share and how it left him in a state that he could barely walk.

After this, Kapil invites the next set of guests, director Mahesh Manjrekar and actress Mahima Makwana and they make their way to the fun segment Post Ka Postmortem where everyone shares a great laugh. Kiku comes in and brings helium balloons with him and all the guests and the audience were left in splits as their voices changed when they spoke.

In the end, host Kapil thanked all the guest for joining the show and greeted them goodbye.