Celebrating the 100 episodes of The Kapil Sharma Show, the upcoming weekend will see Bollywood’s eminent superstars and the cast of Good Newwz - Akshay Kumar, Kareena Kapoor, Diljit Dosanjh, and Kiara Advani taking the entertainment quotient of the show a few notches higher. While all the other actors have experienced the show previously, Kareena, however, marked her presence for the very first time. Being a first-timer, Kareena ensured a heavy dose of laughter with comebacks and confessions. 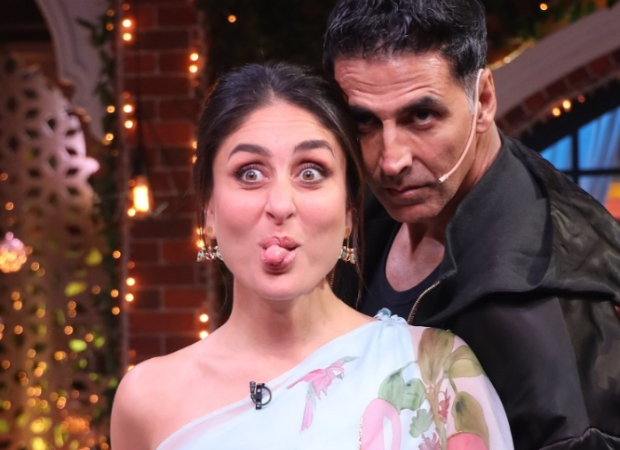 Revealing some interesting behind the scene moments, Akshay narrated a cute banter between him and Kareena. Kapil tried to enquire from Akshay whether Kareena spat on him during the filming of Good Newwz many times that he had to re-do his makeup. Kareena was shocked to hear this but Akshay mentioned that the incidence was captured in the ‘Making of the movie’. Akshay shares, “Yes this is true. When Kareena was doing a scene where she had to push out the baby she was screaming out loud, without realizing she was simultaneously spitting on me.” Sharing some more behind the scene moments, Akshay mentioned that to add extra fun he has incorporated some ‘Nagin dance’ steps in his movies which he used to do at his friends’ wedding.

Conversations continued when Kapil enquired from Diljit whether he actually wore a shoe worth Rs 80K to impress Karan Johar on the day of the trailer launch. Diljit admits, “Yes, this is true. I wore the fancy shoes but it wasn’t to impress Karan.” Rumor game became interesting when Kareena admitted that she has a habit of chewing nails for no reason. She recalls, “I remember how my mom used to apply chilli powder on my nails so that I avoid chewing them unnecessarily. But this is one habit I can't get rid of.” Kiara shared that her birth name is Alia. She had chosen her name to be Kiara. Further in the show cast mentioned that while shooting for Good Newwz they used to shoot from 7:00 am till 12:00 pm and everyone used to get free for the rest of the day – giving them ample time to plan their day better.

Also Read: “I love films and I contribute to my country through my films,” says Akshay Kumar