Indian megastar Kamal Haasan was recently in Mumbai for the promotions of his forthcoming bilingual action thriller, Vishwaroopam 2. Haasan received a warm welcome to the city from popular star & philanthropist Vivek Oberoi as the two met on the sets of kids reality show, India’s Best Dramebaaz. 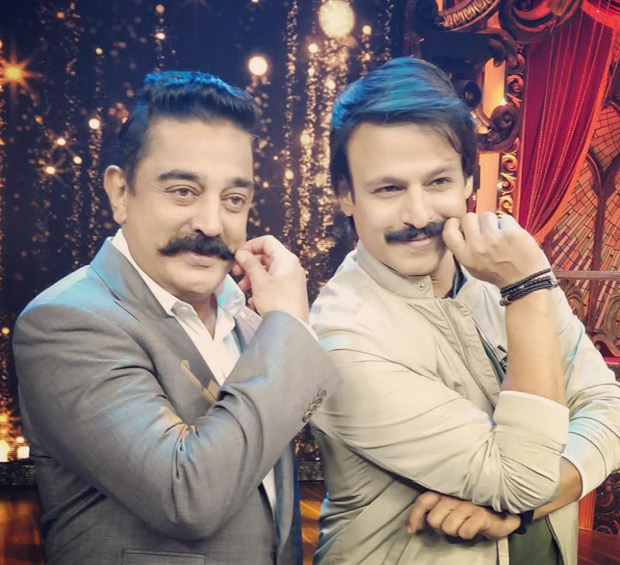 The two who share deep admiration for each other's work, were seen bonding on the sets of the reality show. Vivek even managed to impress Kamal Haasan with a few lines in Tamil, which he aced to the T.

Vivek, whose debut Tamil film, Vivegam was a massive hit and went on to set a benchmark at the box office , spoke to the megastar at length about cinema and culture among other subjects. Much to his surprise, when Vivek expressed his desire of working with him in a movie, Haasan immediately confirmed “Very soon”!

In fact, Vivek Oberoi, who currently sports a classy moustache, even complimented Kamal Haasan's look. The legendary actor was so overwhelmed with Vivek’s hospitality that he invited him and his family for a special screening of Vishwaroopam 2.

Vivek recently made his Tamil debut with Vivegam alongside superstar Ajit Kumar and the film went on to break records at the box office. While his performance was well appreciated, the blockbuster success of the film also went on to cement his position as one of the most bankable and sought after Hindi stars down South.

Such was the reception, that some of the most prominent filmmakers and production houses, approached the star to be part of various films including the Malayalam film Lucifer opposite south superstar Mohanlal (that marks the directorial debut of actor Prithviraj), a Telugu film opposite Ram Charan Teja and Kannada movie Rustum, directed by Ravi Varma.

Fatima Sana Shaikh on her prep for Bhoot…