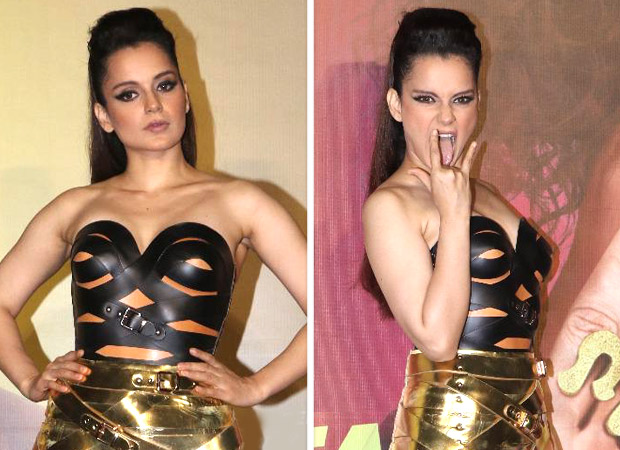 From talking about the new title of the movie to addressing the media about the film, Kangana spoke about it all. When asked about people bad mouthing her, she said, "Mere dushman khud ko hi expose kar dete hai, main toh bas common sense ki baat karti hu (My enemies expose themselves, I speak sensibly)." Kangana has been publicly in feud with Hrithik Roshan, has spoken about the ongoing tussle between Sunaina Roshan and her family, called out nepotism gang Karan Johar, Alia Bhatt and Ranbir Kapoor on various occasions.

When asked about her opinions are the recent controversies, Kangana further said, "Industry gayi tel lene (the film industry can go to hell)."

Kangana further talked about the controversy surrounding the earlier title Mental Hai Kya. She said, "Whenever anything is of Kangana Ranaut, lots of people have several problems. If we outsiders even breathe, there are people who have a problem with that. Keeping all that in mind, even we have learnt to make our way through it and ensure that no one has to face any inconvenience, even if it means that I have to face some inconvenience in return.”

She said that they were recently made aware that the word 'mental' was banned. Kangana said, "There were several cases and threats against us. The South Indian original of Salman Khan’s Kick is called Mental. But we were informed that these words were banned just a few weeks ago.”

Kangana further added that the Central Board Of Film Certification (CBFC) was very supportive. “The Censor Board cooperated with us a lot. We have been given a U/A certificate. They said, ‘you’ve made a good film and we couldn’t find anything offensive in it.’ We have faith in our intentions," she said at the trailer launch.

When asked how she has calmed down now and is unfazed about the change in the title, she said, "Haan meri mummy ko ek astrologer ne kaha tha ki 30 ke baad ye thoda calm down hoti jayegi. 30 mera ho gaya hai ab. The astrologer said to my mom, 'Dheere-dheere iski aag bhujti jayegi', to woh ho raha hai, I can see that (Yes, an astrologer told my mom that after 30, Kangana will start calming down.I have crossed 30, so I have started to stay calm and I can see that happening)."

Kangana talked about how she has been shamed in her life and called mentally unstable on various occasions especially during the most controversial phase in her real life which was referring to the feud with Hrithik Roshan. "There was a phase in my life where people tried to openly shame me by saying that I have a mental illness. They said I am on medication and hence she is claiming things. I had answered that as well saying, ‘so what?’. Even though I am not on any medication, I would not have been embarrassed if I was," she said.

“When Kanika narrated me the role, I thought it was my story. If the phase of 2016-2017 hadn’t come and if I had heard the story then, maybe I wouldn’t have considered it an issue – a girl being called mentally unstable. I related to the film because of my phase,” the actor said.

She said, “The film is not structured only around mental illness, offering a solution at the end. A mainstream heroine is always happy and chirpy – loved by all. But we haven’t seen a girl with her own issues and on medications. A mainstream heroine who is dealing with a mental illness and trying to fight it. It is not a sob story. She is doing her business, her job and trying to see the silver lining.”

JudgeMentall Hai Kya is an intriguing thriller with doses of quirk which will encourage everyone to embrace and celebrate their individuality and distinctiveness. Produced by Shobha Kapoor, Ekta Kapoor & Shaailesh R Singh, Directed by Prakash Kovelamudi, the film is set to hit screens on July 26, 2019.