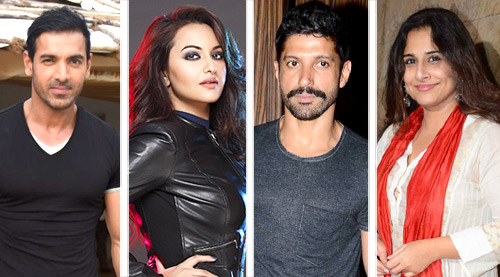 November is set to be a record breaking month for Bollywood. For the first time ever in the history of Indian films, as many as five sequels are arriving in back to back weeks, and that too in the same month.

Incidentally, each of these three films belongs to a different genre altogether. While Rock On!! 2 is a musical, Force 2 is an action film, Tum Bin 2 is a romantic entertainer, Kahaani 2 is set to be a dramatic suspense tale and Chaar Sahibzaade - Rise of Banda Singh Bahadur is an action historical. That said, amongst the five films, only Rock On!! 2 is a true-blue sequel while rest are second installments of the franchise affairs.

"Yes, Farhan Akhtar, Arjun Rampal, Purab Kohli and Prachi Desai are playing the same characters as they did in Rock On! Shraddha Kapoor is the new entrant and she joins them all in taking the story forward, which is largely set in Shillong, the rock capital of India," an insider adds, "Good time has been spent in making the film but its recall value is so huge that pitching it again for the audience won't be an issue."

On the other hand for director Anubhav Sinha, who started his career with Tum Bin, life is coming back full circle as he brings together a fresh pairing of Neha Sharma, Aditya Seal and Aashim Gulati. Yet again, music is expected to be the film's USP. The most intriguing of them all though is Kahaani 2 which sees Sujoy Ghosh occupy the director's chair four years after Kahaani [2012]. What is heartening is the fact that yet again, the female protagonist is Vidya Balan and she is joined by Arjun Rampal (who would now have two releases in the same month, with Rock On!! 2 arriving a couple of weeks earlier).

"As for action junkies, John Abraham should keep the adrenalin pumping as he returns with an even brutal 'force', this time with Sonakshi Sinha. The film's action is said to be unprecedented. On the other hand Chaar Sahibzaade - Rise of Banda Singh Bahadur is much more than just an animated. The blockbuster success of Harry Baweja's first in the series, Chaar Sahibzaade, proved that," the insider continues.

"This is a whole range of bouquet waiting to be grabbed by the audience," says a trade expert, "It is a good variety in the offering."

Fortunately for Bollywood though, there is no Hollywood sequel releasing in November else that may have just added onto a plentiful of choice for the audience.