Actor Ranveer Singh made his acting debut in 2011 with the film Band Baaja Baaraat. Since then he has featured in several hit films and will next be seen in Jayeshbhai Jordaar. The film will be released on May 13 and the trailer was unveiled on Tuesday. The film also stars Shalini Pandey and Boman Irani in pivotal roles. The whole Jayeshbhai Jordaar team was in attendance for the film's trailer premiere event, where they talked with the media and opened up about their experience working on the film. 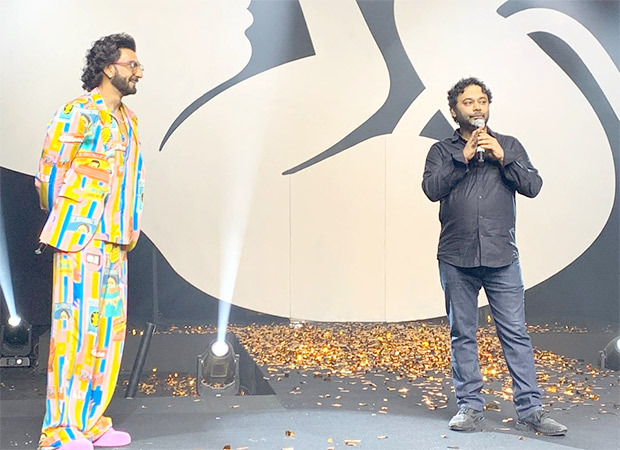 Ranveer Singh, who amazes onlookers with his fashion choices once again made a quirky statement in a three-piece suit with a graphic design at the Jayeshbhai Jordaar trailer launch. The suit had numerous unusual prints, like Namaste and Indian women, as well as the words "shop local," "dry only," "recycle," and "sustainable" on it. This time, the film's producer Maneesh Sharma had a rather interesting question for Ranveer about his fashion choice. "Ye nada intentional hai? (Are the drawstrings intentional?)," Maneesh asked during the press conference. Reacting to it, Ranveer playfully answered, "Ye Jayeshbhai ka style hai".

Filmmaker Maneesh Sharma had discovered Ranveer Singh for his directorial debut Band Baaja Baaraat. Talking about the actor and the film, he had earlier said, “In Jayeshbhai, though, I see Ranveer delivering a tour de force performance that makes me marvel yet again at what artistic heights this fine actor is capable of achieving. What makes it even more satisfying is that he is accompanied by a fresh new talent like Shalini in a movie helmed by Divyang - a debutant director promising to take us all on a joyride. I hope people love the trailer of the film and are hooked to watch the magic of Jayeshbhai Jordaar on the big screen”.

Directed by debutante Divyang Thakkar, Jayeshbhai Jordaar will release in theatres on May 13.