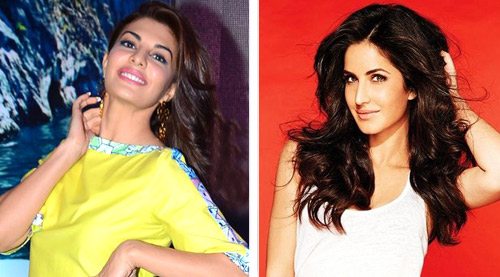 There are striking similarities between the lives and careers of the two Bollywood beauties.

1. Jacqueline Fernandez and Katrina Kaif, both had the Amitabh Bachchan for a co-star in their debut films viz., Aladin and Boom, respectively. Both the films are considered among the worst of Mr. Bachchan's career.

2. Both are products of a hybrid marriage. Katrina Kaif's mother is British and father Kashmiri (or so she claims). Jacqueline Fernandez's father is Sri Lankan and mother of Canadian origin.

3. Besides being Bollywood babes from outside India, the fair-and-lovely and comely avatars of Zeenat Aman, both Katrina Kaif and Jacqueline Fernandez are Salman Khan's Chosen Ones, though in different ways.

4. Foreigners both, their Hindi was non-existent when they started in Bollywood. To her credit, Jacqueline Fernandez now manages Hindi much better than Katrina Kaif, who still can't speak the language.

5. Both were struggling for a foothold in filmdom until Salman Khan befriended them. Both acknowledge their careers' debt to Salman Khan.

6. Katrina Kaif started her career on a wrong note with Boom. It could have finished her off, if Salman Khan's eyes had not fallen on her and cast her in Maine Pyar Kyun Kiya. Likewise, Jacqueline Fernandez got a new lease of life with Salman Khan in Kick. Sujoy Ghosh's Aladin could've ended her career even before it started.

9. Katrina Kaif, who did Race, was replaced by Jacqueline Fernandez in Race 2. They have never shared screen space yet.

10. Most actresses are not repeated in movie franchises of Bollywood. Jacqueline Fernandez is the only Bollywood actress to feature in all three instalments of the Housefull franchise.