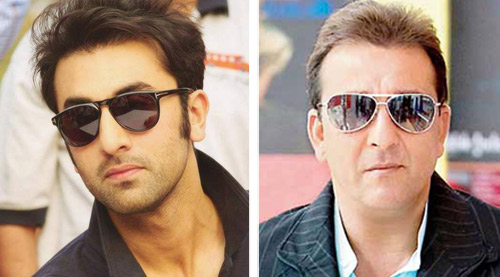 While we are happy to know that the extremely gifted though box-office-challenged Ranbir Kapoor would be finally playing a real-life character and not the flights of fancy that he specializes in, the choice of subject for Ranbir's first bio-pic is alarming.

Ranbir will play....hold your breath....Sanjay Dutt!!! Why Dutt? We may well ask. Sources close to the actor say Ranbir's near and dear ones are not happy with the idea of a Dutt bio-pic.

Could it be because Dutt's guns-and-scandals story would make compelling cinema? But, how much of the truth would Raj Kumar Hirani be able to tell about Dutt and how much of that truth would Ranbir be willing/able to subsume in his on-screen personality?

Wouldn't Dutt, according to Kapoor end up looking like another version of Johnny Balraj in Anurag Kashyap's disastrous Bombay Velvet?

The Indian film industry is known to be fiercely protective about Dutt's alleged misdemeanours. All his heroines and coterie of friends still believe 'Baba' (Dutt's nickname) is a victim of circumstances. Baba-can-do-no-wrong is hardly a reliable and strong premise for a bio-pic.

That apart, is the audience really interested in a bio-pic on Sanjay Dutt? Is his sordid saga worthy of a cinematic treatment and that too by Hirani who is a master of mellow benign dramas?

A much better idea for Ranbir was the Kishore Kumar bio-pic that was planned with Anurag Basu at the helm. Ranbir possesses the zany joie de vivre to play the crazy genius. As long as Basu would not have ended up making a Barfi of the genius' life, this film would have been great fun.

But then, 'Man proposes biopic, and the family disposes'. Kishore Kumar's son Amit Kumar, wanted many changes in the script.

Sanjay Dutt's family is unlikely to demand any changes. They would be only too happy to see a man in jail for alleged anti-national activities being glorified by his friends.