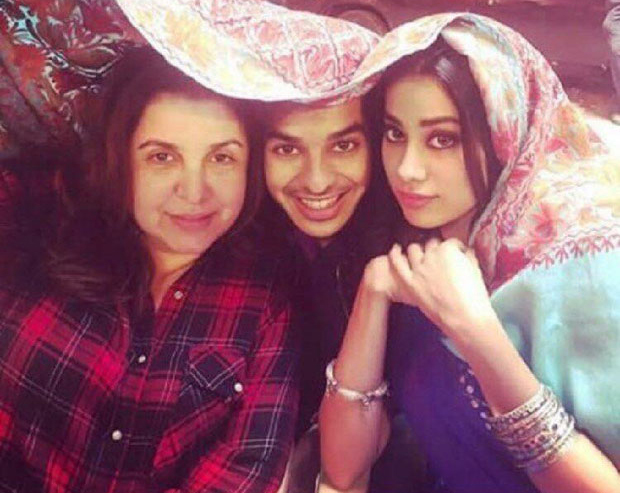 Karan Johar has truly managed a casting coup of sorts after he roped in veteran diva Sridevi’s elder daughter Jhanvi Kapoor to play a female lead opposite Shahid Kapoor’s half-brother Ishaan Khatter in the Hindi remake (Dhadak) of Marathi blockbuster, Sairat. The two leads will play teenage lovers in this flick and KJo is leaving no stone unturned to make sure that he packages the film well, including all the masala elements to make it memorable for masses.

We have got our hands on a picture fresh from the sets of this much awaited film. Celebrated choreographer Farah Khan is seen in the picture with the two young leads. By the looks of it, the three seem to be having a ball while shooting for the remake of the hit party song ‘Zingaat’! We are sure that both Jhanvi and Ishaan will wow us with their sizzling chemistry and Farah’s electrifying choreography will only add to the madness, leaving us gasping for more.

According to the report in a daily both Shashank Khaitan (director) and producer Karan Johar wanted to rope in Farah for the song. A source close to the film revealed to a daily, “Karan and Shashank were both on the same page. They love ‘Zingaat’ and the song will be something to watch out for. While the tune remains the same, the lyrics will be altered. The title — ‘Zingaat’ — may change as they may come up with another catchy phrase. Karan made one call to her (Farah) and she immediately agreed."

Stay tuned to Bollywood Hungama to get fresh updates hot off sets of your favourite films.