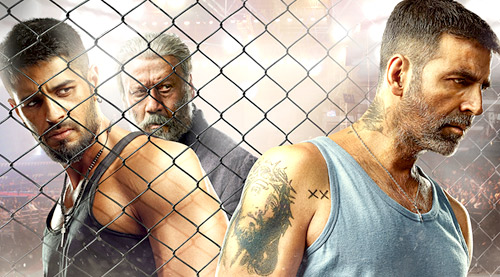 If 'B' is the lucky letter this year, what with Baby, followed by Bahubali and Bajrangi Bhaijaan setting the pace, then Brothers has got a good grip on a winsome formula. The idea for the title came from the film's pugilist protagonist Akshay Kumar himself. Akshay says brotherhood is what Brothers is about. We believe him. With a father, wife and daughter thrown in.

Rocky meets Sooraj Barjatya? Title having won the battle, the war remains to be won.

Would Karan Malhotra's Brothers crack the box office code? According to trade experts it looks like a sure shot winner from beforehand.

Trade expert Komal Nahata is gung-ho about Brothers. "It looks like it will score at the box-office. There is no better combination formula than action and emotions. And Brothers has that deadly combination. I am sure Brothers will rule the hearts of brothers, sisters, mothers, fathers, uncles, aunts, nephews and nieces."

Says Bajrangi Bhaijaan's producer Amar Butala, "Brothers looks poised for a solid weekend and has the elements to have a successful run at the Indian box-office. It's a remake of the Hollywood film Warrior with dependable actors like Akshay Kumar and Sidharth Malhotra leading the cast. The trailer has promised us some incredible action. And the August 15 holiday will only help the film to take a flying start at the box-office."

Adds trade analyst Atul Mohan, "Brothers is another big-ticket film after Bahubali and Bajrangi Bhaijaan. With so many big names like Karan Johar, Dharma, Fox-Star, Endemol and Lionsgate associated with it, Brothers can't go wrong. The cast is impressive. The director Karan Malhotra's debut film Agneepath entered the 100-crore club. Plus there is the Independence Day weekend and a great buzz on networking sites. All these factors indicate a blockbuster. I expect big numbers at the box office."

Anand Vishal, Head of Operations Fun Cinemas opines, "We feel Brothers has the potential to be a blockbuster. It's the Independence Day weekend. It should do well. There was a lull after Bajrangi Bhaijaan and it's been a month since that was released. The box-office is ready for another hit."