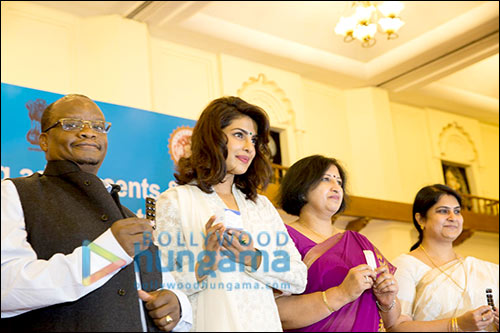 UNICEF Goodwill ambassador Priyanka Chopra today emphasized the importance of stepping up the fight against adolescent anaemia, regarded as a major health problem among adolescents in developing countries including India. Addressing the youth from across the county, in a short film released today to mark the World Youth Day Priyanka said, "One out of two young girls and one out of three young boys in India are anaemic. Anaemia is a serious health problem not only in rural but also in the urban areas. Anaemia can be prevented by taking iron-rich diet, Iron and Folic Acid (IFA) tablets once a week and deworming tablets every six months. It is really that simple".

The film highlights the importance of the Government of India's Weekly Iron and Folic Acid Supplementation (WIFS) programme for adolescents that was launched in 2012 to reduce severity and prevalence of nutritional anaemia in adolescents between 15 and 19 years. As many as 56 per cent girls and 30 per cent boys in this age group in India are anaemic, according to the National Family Health Survey (NFHS) 3 data. This group comprises one-fourth of India's population and is a key driver of its future economic growth.

Dr. Sushma Dureja, Deputy Commissioner, Adolescent Health said, "The target for WIFS programme are adolescent girls and boys in government, government aided and municipal schools, between classes 6 and 12 along with out of school adolescent girls . The aim is to improve the iron stores in the adolescent population thereby addressing the problem of anaemia caused by nutritional deficiency."

The WIFS programme, which also covers out-of-school adolescent girls through Anganwadi centers, uses a proven and highly effective solution of providing (free of cost) weekly supplementation of deworming tablets, along with screening and counselling services.