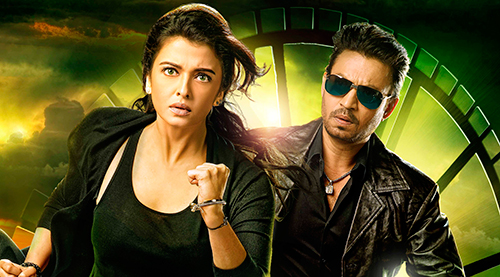 For her last release Guzaarish, Aishwarya Rai Bachchan didn't have much running to do as she was relegated to nursing Hrithik Roshan, who was bed ridden. The Sanjay Leela Bhansali film was set largely indoors and there was no action of any kind, especially outdoors. This isn't the case though for Aishwarya's next release Jazbaa, which is an action dramatic thriller. Since a large portion of the film has been shot outdoors, there are also scenes involving some deadly action scenes on the roads.

"Aishwarya had a task indeed as she had to drive through some real rough roads of Mumbai," informs our source, "Since the film deals with the kidnapping of Aishwarya' s daughter and she has to 'race against time' (as is also the tagline of the film), there are scenes where she is required to break quite a few rules."

Though all necessary precautions were taken, Aishwarya Rai Bachchan was still conscious of the fact that she had to drive really rash.

"This is where Irrfan Khan, who plays the male protagonist in the film, came in handy." The source adds, "Since he has performed action in many of his films before, he volunteered to share certain tips with Aishwarya when it came to driving rash for the camera, and still ensuring that neither she nor the crew members canning the scenes, were hurt."

While Sanjay Gupta ensured that there were no stray passer-bys in the 'veeran ilaaka' on the outskirts of Mumbai where the scene was being shot, Aishwarya wanted to be really sure of what she was getting into.

"Perhaps, it was the 2003 incident from the shooting of Khakee that was still playing in her mind," a close associate adds, "Back then, for the Rajkumar Santoshi film, she had received a fracture on her foot when a jeep had hit her at a high speed, hence resulting in her and co-star Tusshar Kapoor topple over and fall in the bushes, while narrowly escaping hitting the rocks. Though many years have passed by ever since, the psychological strain is expected to remain."

However, Irrfan Khan calmed her down while asking her to take it easy.

"He gave her good support and after a few initial hiccups, the scene was canned," a unit member adds, "The scene has actually turned out to be a highlight of the film in true Sanjay Gupta style."

We would like to see how it all plays on screen.