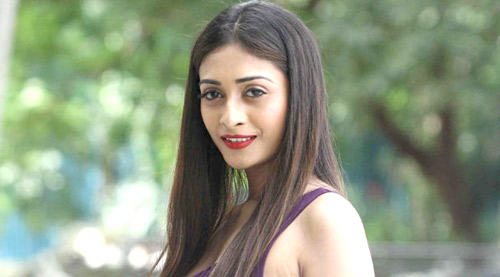 Polite, professional and poised - that's the impression newcomer Satarupa Pyne gives when you get into a conversation with her. As one of the five 'Calendar Girls' in the

namesake film by director Madhur Bhandarkar, Satarupa plays a young woman who finds herself in the midst of an IPL controversy. For her first ever film, she gets to don a glam avtar while also

gearing up for an act that needs her to touch upon the darker side of the sports arena. In this launchpad affair, Satarupa is hoping to find a nod of approval from the audience which is looking

forward to yet another shocking tale from the film's director.

How did you bag Calendar Girls?
Since I have been a model, worked with many fellow model friends and also done commercials, I have managed to gain decent experience over the years. The very title Calendar Girls was pretty

intriguing for me. When I heard about it, and also the fact that it was to be helmed by Madhur Bhandarkar with whom I really wanted to work with, I was sold there and then. He has worked with

models earlier too in Fashion and now when this one came, I got to know that five newcomers were required. I didn't want to lose out on opportunity. That said, I wasn't quite prepared and

just went ahead to meet him on getting a call.

What happened then?
The best part here was to meet Mr. Bhandarkar. See, when you go to a Yash Raj or a Dharma, you don't get to meet the Heads. You meet those in charge of auditions and then get a call if you do well.

In case of Madhur though, he is personally there to shortlist his actors. He likes to meet all the girls because he doesn't just go by the call of others. As a matter of fact, he never does any

audition either. He has worked with senior actresses and the ones whom he trusts to deliver. When I met him, he said that he wanted to read the personality of his actors. If he likes a chat, he

would extend it or would ask her to leave.

Needless to say, your conversation must have been an extended one.
Yes (smiles). In fact, my friends tell me that they don't understand the transitions I have made over the years. I was in college one fine day, and then, the next day I was a model. Today, I am an

actress. See, I have lived my life to the fullest, albeit very abruptly. Who knows, tomorrow I may be a politician. It is just an impulsive way that I live life. I always finish something

and then I move on. I am always very happy and do not regret anything. My life journey has been quite exciting too. I have done my Master in English, and then started pursuing modeling in 2010.

This is where I made sure to become quite a famed model.

And then you decided to turn into an actress....
When you know that it is a film with Madhur, you are instantly on as he has this thing of making his women get all the due respect. He makes films with women and you don't get such biased directors

who only work with women characters. There is so much to do; there are so many stories to be told. Still, there is a reason why a senior director like him is sticking to making films that have the

subject of women empowerment. We don't have such directors in Bollywood where as an actor you know that whatever you do would be justified on screen.

Example?
Look at Priyanka Chopra. Why would she still want to work with him? Why would Deepika Padukone say that she is pining to make a film with him? That's because he has it in him to give you a subject

which would make you cherish to do a part that you would love to play in real life. It is so much fun out there.

Other than fun, it must have been tough too?
Being a Bengali girl, to get an opportunity to play a Bengali in your very first film is a matter of luck. Tomorrow, if I come in and do an audition where they ask me to speak in Urdu or Punjabi,

it would be hard to get the linguistic part right. We Bengalis speak in a characteristic sweet way so it is tough to grab another language. However, after you do your first film, it starts coming

naturally to you. I am sure that today if my director gives me something new to enact, I would be able to mould it all in quick time. That's the least I need to do after spending a year in the

Shahid Kapoor posts a selfie as he wraps up…