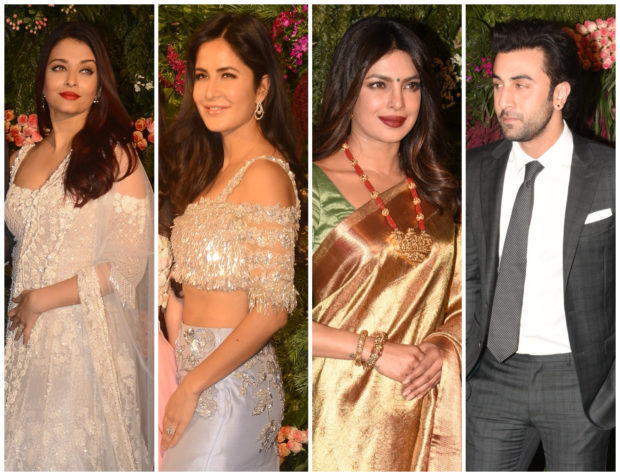 Almost month long wedding celebrations came to an end at Anushka Sharma and Virat Kohli’s Mumbai wedding reception. The power couple, who got hitched on December 11 in Italy, had a grand reception for all their family and friends. After the grand New Delhi reception, the Mumbai reception was held last night. 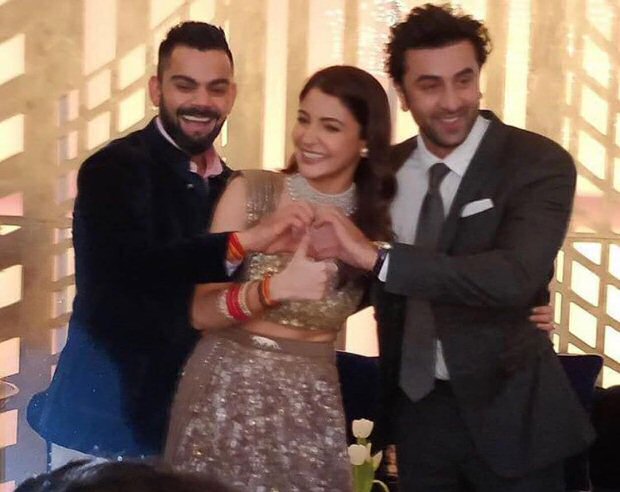 Ranbir Kapoor recreated the Ae Dil Hai Mushkil signature pose with Anushka and Virat and they could not stop laughing. 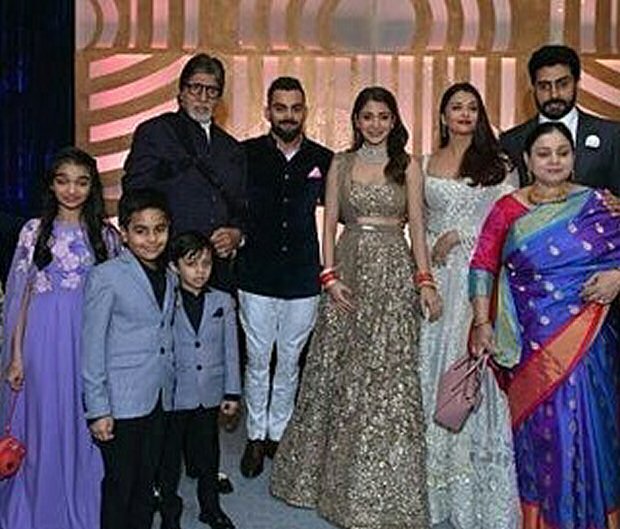 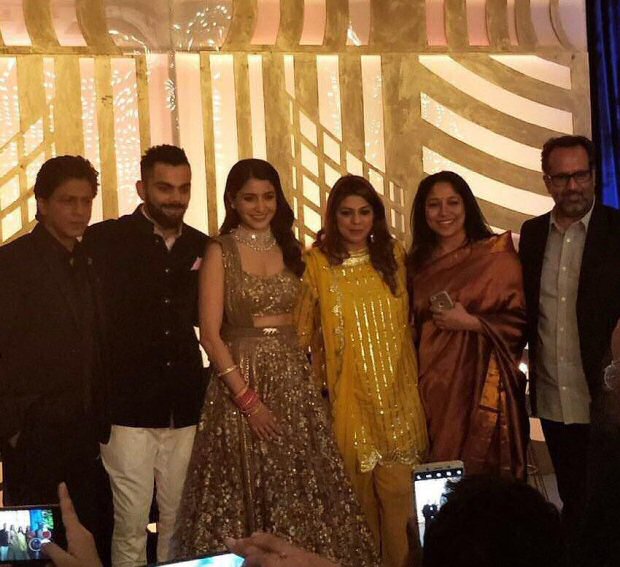 Shah Rukh Khan went onstage to give blessings to Anushka and Virat with director Aanand L Rai. As Anushka is starring in this untitled film with SRK, it was only apt for them to get clicked together. 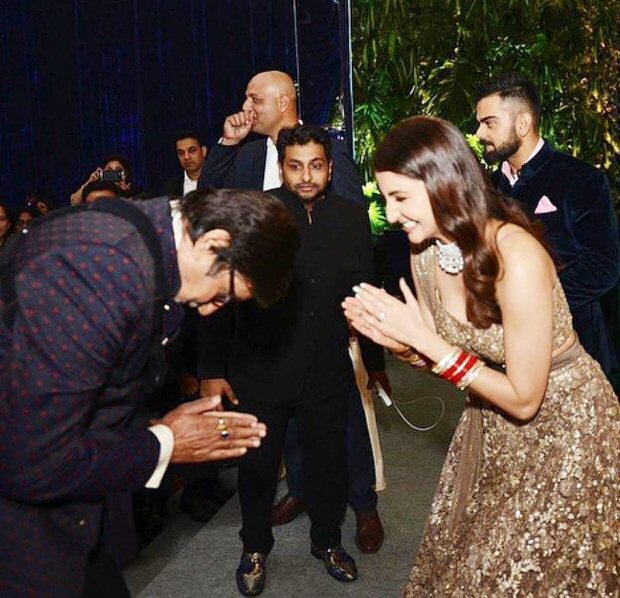 Amitabh Bachchan and Anushka greeted each other doing Namaste as Anushka could not stop smiling. 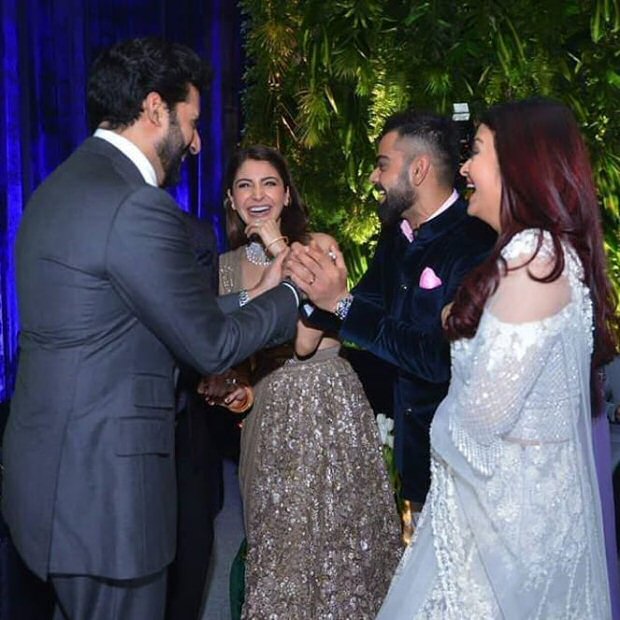 Aishwarya Rai Bachchan and Abhishek Bachchan were seen sharing a laugh with the newlyweds as they enjoyed the reception. 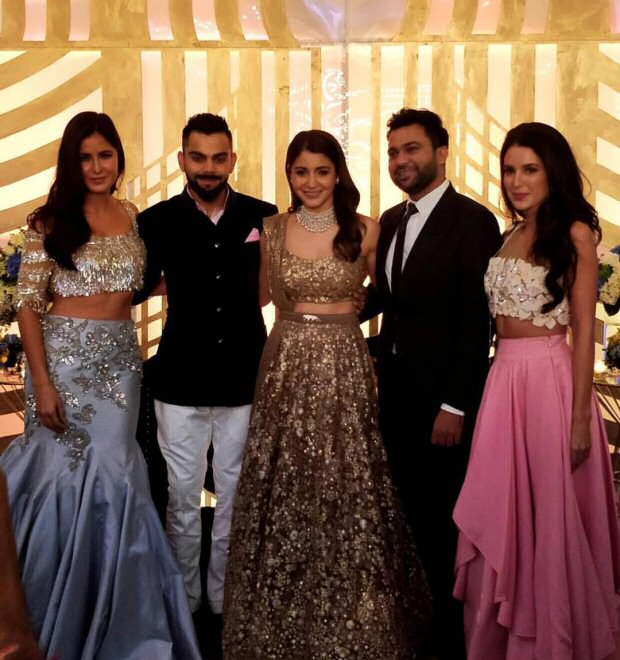 Katrina Kaif, who has starred with Anushka in Jab Tak Hai Jaan and now in Aanand L Rai, came to congratulate the couple. She was accompanied by Ali Abbas Zafar and sister Isabelle Kaif. 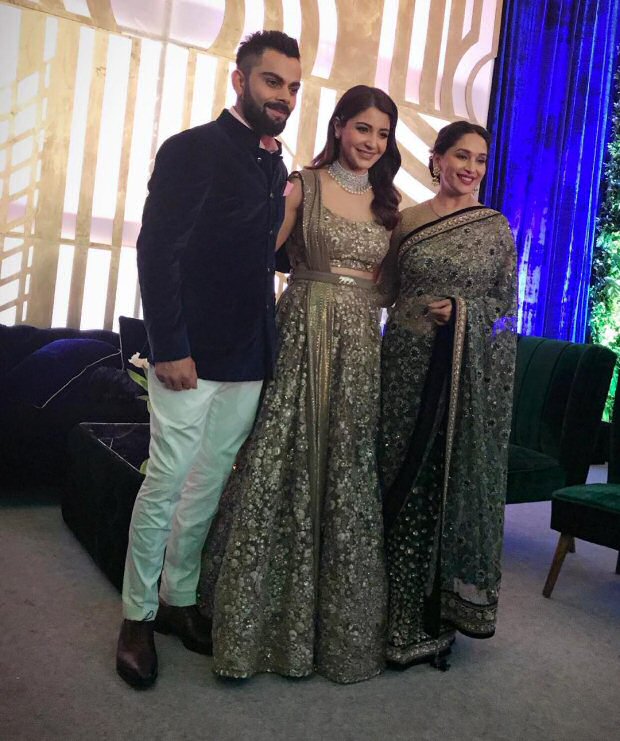 Madhuri Dixit flew solo for the reception and shared a lovely picture with Anushka and Virat. She wrote, "Wishing the fairytale couple a very happy, joyous and prosperous married life!" 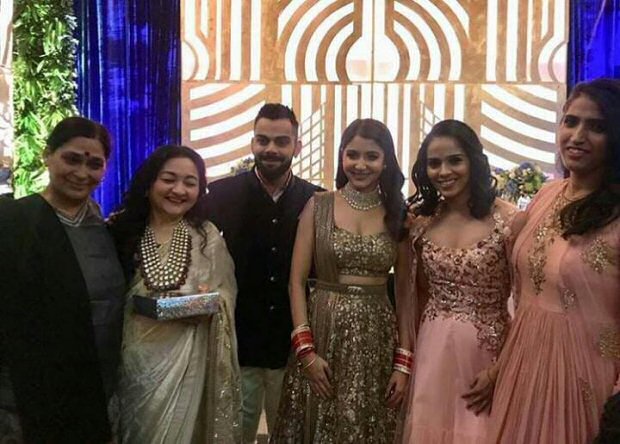 Badminton champion Saina Nehwal along with her family came to give the newlyweds her heartiest blessings. 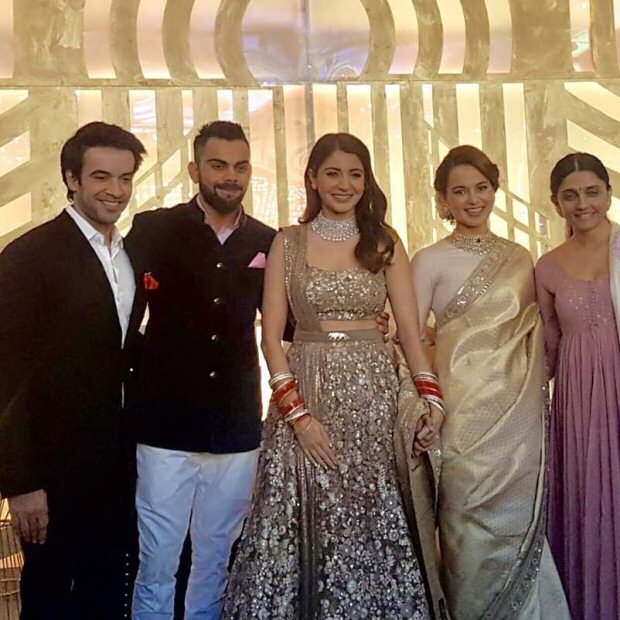 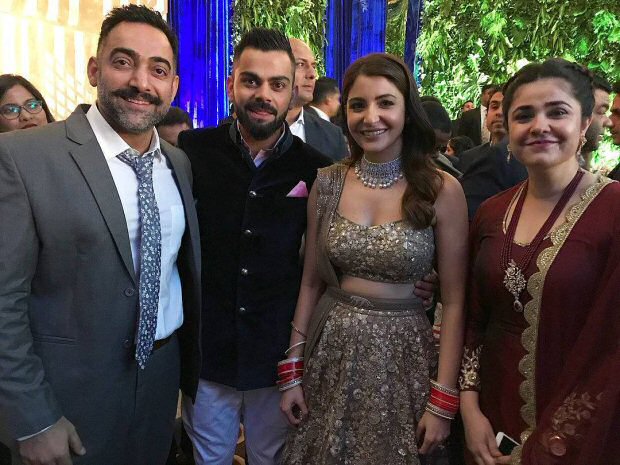 Secret Superstar actress Meher Vij and her husband Manav Vij were also the guests at the celebrations. Meher shared a picture and wrote, "Love Love Love and Love to this ghaint Jodi #virushka." 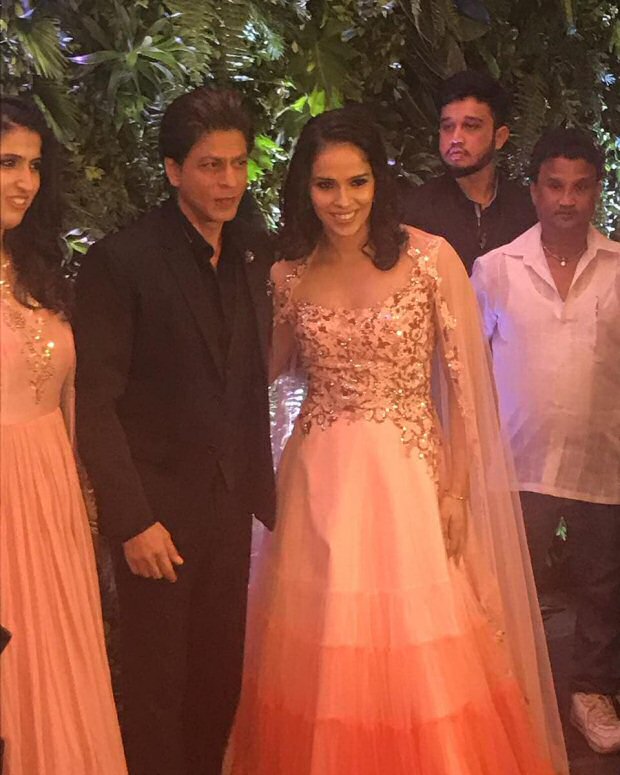 Saina Nehwal had a fan-girl moment upon meeting Shah Rukh Khan while arriving at the venue. She captured the moment and wrote "King Khan @iamsrk." 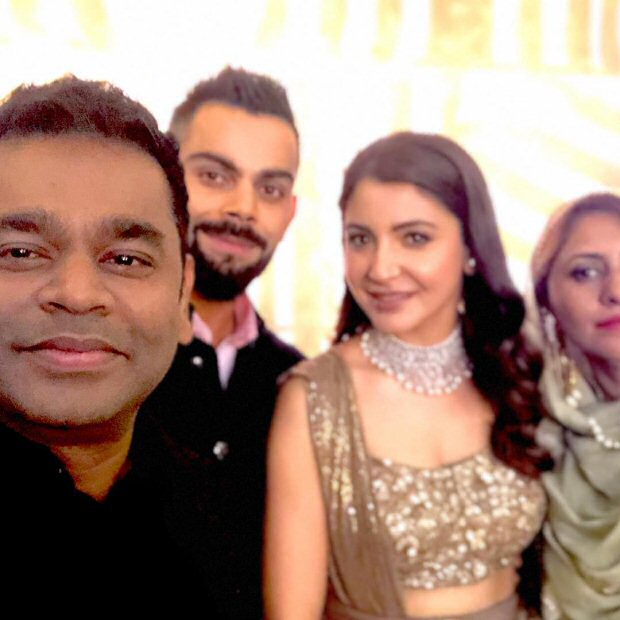 Music maestro AR Rahman and his wife also captured a perfect selfie with the bride and groom and wrote, "Shaadi Mubarak." 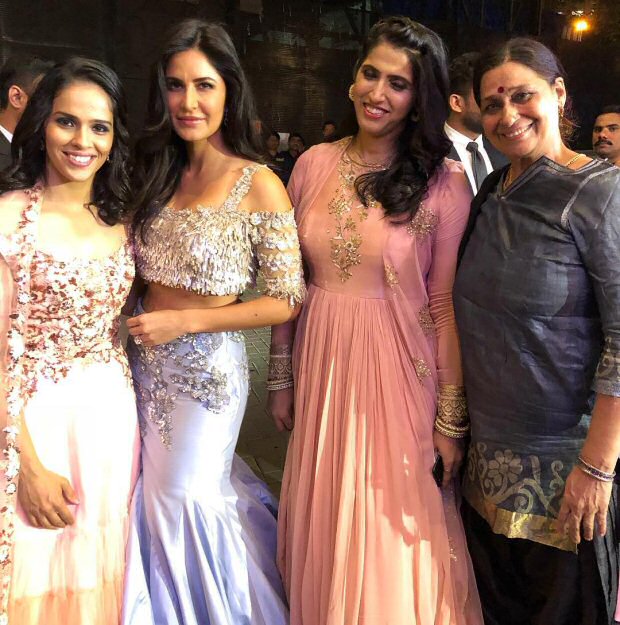 Saina Nehwal even met Katrina Kaif and introduced her to her family. 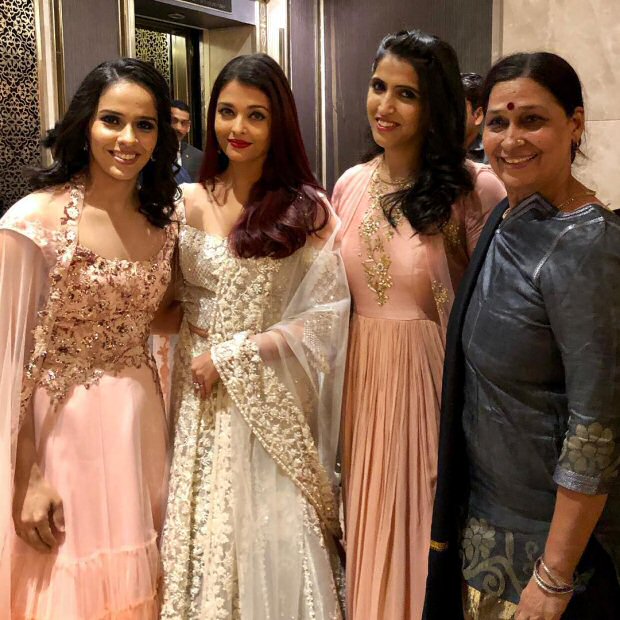 Saina Nehwal sure had another fan-girl moment upon meeting Aishwarya Rai Bachchan at the wedding reception. She captured the moment with her sister and mother. 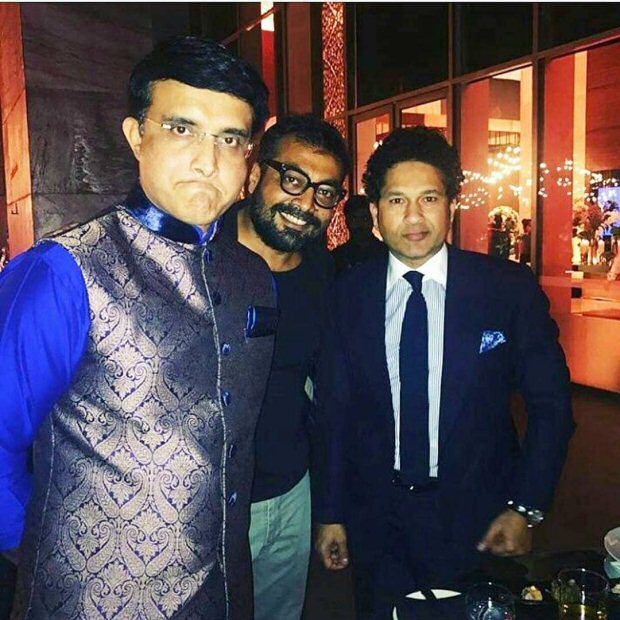 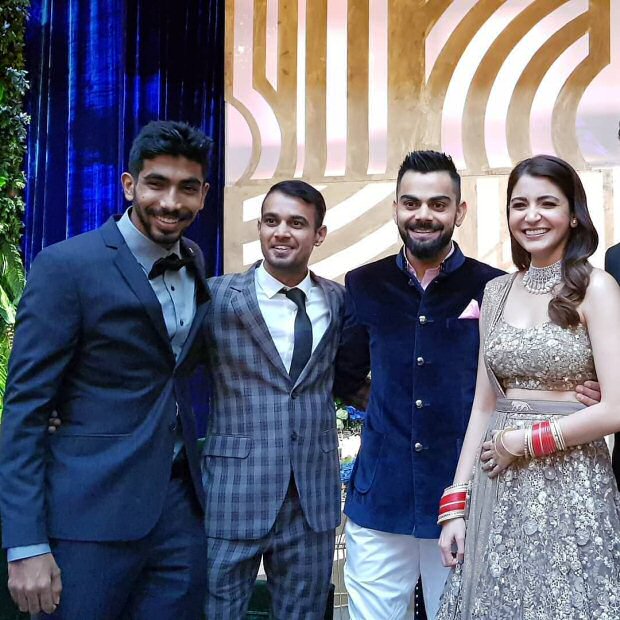 Cricketer Jasprit Bhumrah shared some moments with Captain Kohli and Anushka and wrote, "Wishing you both a lifetime of happiness together! Congratulations. @virat.kohli @anushkasharma." 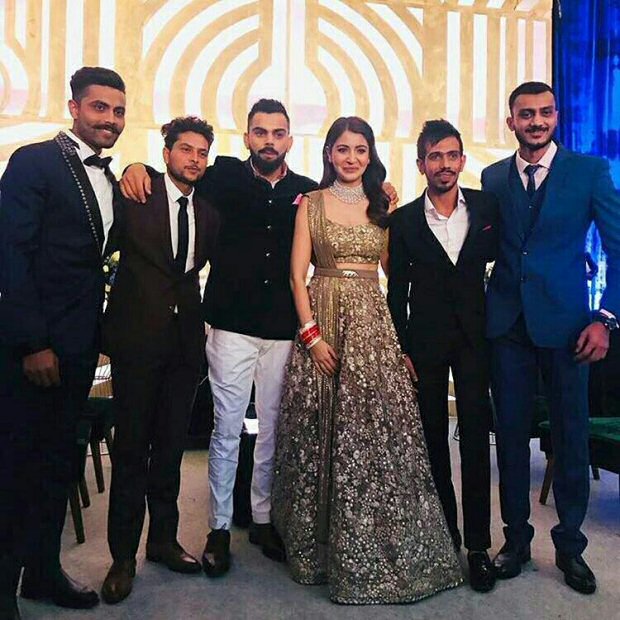 If Bollywood was present at the grand reception, so were the cricketers. The spin squad- Ravindra Jadeja, Yuzvendra Chahal, Kuldeep Yadav and Akshar Patel - arrived together for their Captain's reception. 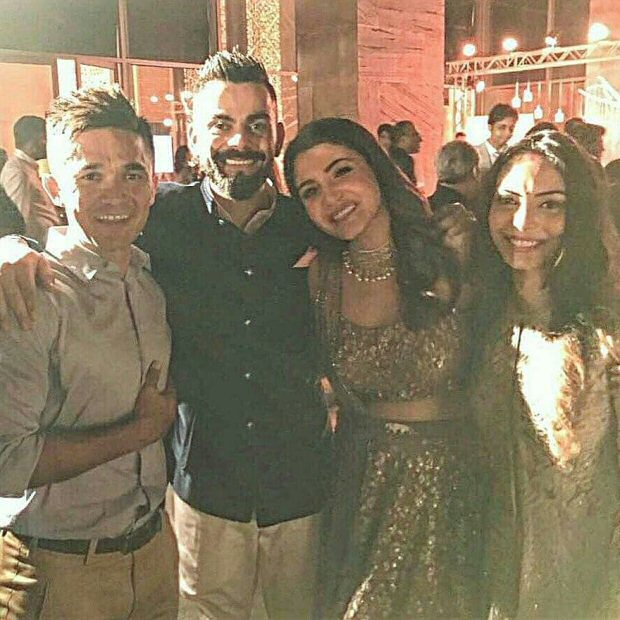 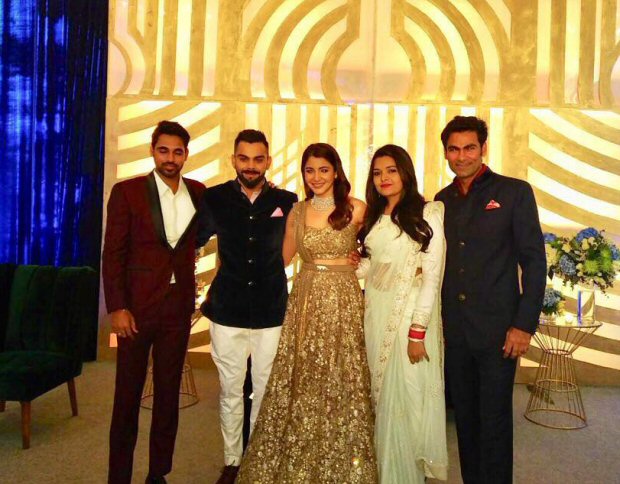 Mohammad Kaif, Bhuvaneshwar Kumar and wife Nupur Nagar went on stage together to meet the newlyweds. Bhuvaneshwar is also a newly married guy who had a beautiful ceremony last month. 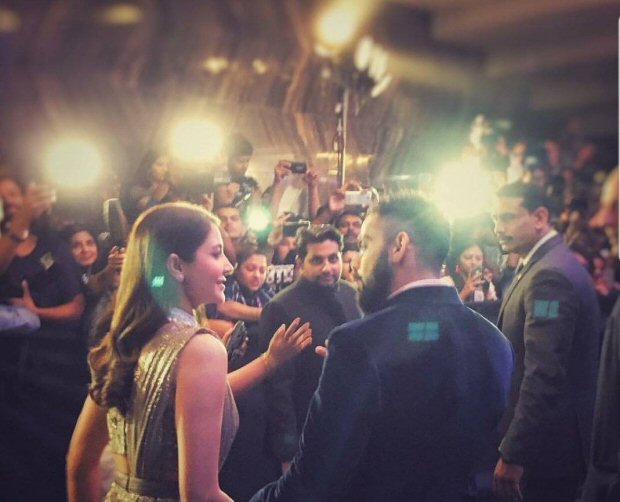 Anushka Sharma and Virat Kohli were captured in this beautiful moment while paparazzi clicked them when they arrived at the venue.