Actress Aishwarya Rai Bachchan was spotted with daughter Aaradhya at Kalina Airport in Mumbai on August 20. As the mother-daughter duo headed to Orchha for Aishwarya’s upcoming movie Ponniyin Selvan for shoot, Aishwarya’s husband, actor Abhishek Bachchan dropped them at airport. Saying goodbye to Aaradhya with a hug, Abhishek was seen with his arm in a sling, which seemed to be injured along with his fingers. 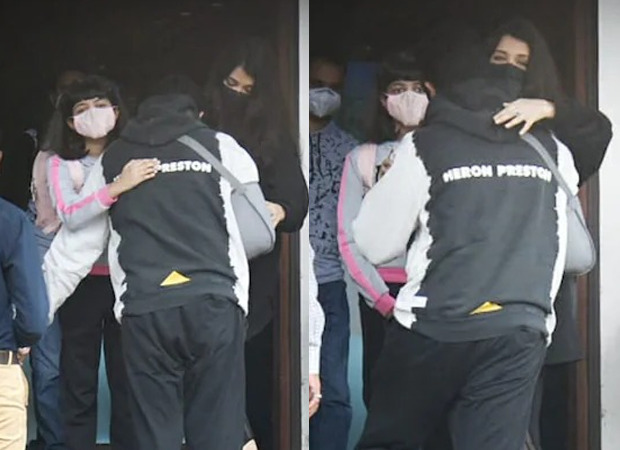 While Aishwarya was carrying an all-black outfit, with black sweatshirt, leggings, a matching bag, covering her face with a black mask; Aaradhya was wearing her grey and pink outfit with a large butterfly at the front, having a face shield with a mask as they pose with the flight crew for pictures.

Aishwarya and Sarath are co-stars of Ponniyin Selvan, which is being directed by Mani Ratnam and is based on a novel by Kalki Krishnamurthy. As Aishwarya, Abhishek and Aaradhya had recently paid a visit to Sarath Kumar and his family in Puducherry, in Tamil Nadu, Sarath's daughter Varalaxmi Sarathkumar shares picture from the get-together, captioning her post, "Met 3 of the warmest and most humble people last night... none other than the gorgeous @aishwaryaraibachchan_arb the handsome hunk @bachchan and their sweetest daughter #aaradhyabachchan Despite the families and lineage that they hail from, their humility and warmth was so amazing, I was just overwhelmed with their love.!!! It was so sweet of you to meet us and spend time with us.. May god shower all his blessings on your family! Thank you daddy for making this happen @r_sarath_kumar I think @poojasarathkumar is still recovering from the shock.!!! Hahah #fangirl."

On the work front, Aishwarya Rai Bachchan was last featured with co-stars Anil Kapoor and Rajkummar Rao in Fanney Khan in 2018 while Abhishek's last release was The Big Bull. His upcoming projects include Bob Biswas and Dasvi.