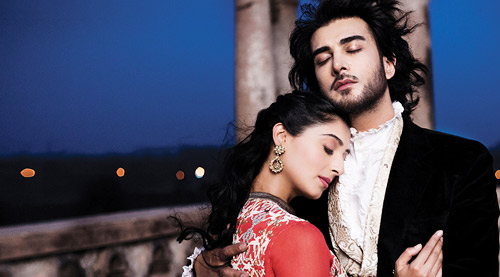 Pakistani heart-throb Imran Abbas, who made a slow start in India and Bollywood with Creature last year, is all set to return to Hindi cinema with Muzaffar Ali's period drama Jaanissar.

Imran can't thank his stars enough for the privilege of working with Muzaffar Saab. "This is a filmmaker, an artiste I've grown up idolizing. Umrao Jaan was not just a film. It was a timeless work of art, like the Deewan-e-Ghalib. Some experiences go beyond the immediate. Umrao Jaan is one of those are achievements."

To be chosen to play the lead in Muzaffar Ali's first feature film in 33 years is no small matter for this young Pakistani model turned actor.

"When Muzaffar Saab offered me a role that goes back in time to nearly a 100 years ago, I was over the moon. This is a film and character steeped in poetry. Luckily, meri Urdu bahot achchi hain. I've grown up in an atmosphere of literature and poetry. My grandfather was a poet and my sister is a poetess. Eminent poets visited our home when I was a child. I grew up in an atmosphere of sher-o-shayari"

Imran Abbas is no stranger to TV too. "For nearly fifteen years, I've been an active part of the Pakistani television industry. I've done some remarkably successful serials. Over there, serials don't go on infinitely. They've a strong plotline and are helmed by powerful performances. I don't have to work round-the-clock in a serial in Pakistan. Full marks and my unstinted admiration for television actors in Mumbai who work 24/7 over a series that goes on for years sometimes. I admire their tenacity."

He treasures every moment of his work relationship with Muzaffar Ali. "We really don't know how the film would fare. But, more than box office success, Jaanisaar is a film with a huge archival value. It will be remembered forever. I am glad I'm part of it."

Muzaffar Saab recently paid Imran a huge compliment when he said Imran was in the filmmaker's opinion the best looking guy in all of India and Pakistan put together. Sighs Imran, "You know what? That is a big compliment. But looks are very transient. There are scores and scores of models and wannabe actors who're better-looking than me. The biggest compliment that I got from Muzaffar Saab was that I reminded him of Farooq Shaikh.

Considering the kind of work Farooq saab did with Muzaffar Saab in Gaman, Anjuman and Umrao Jaan, this is the highest praise. I couldn't have asked for more." Imran, who is looking at making a career for himself in Mumbai, would have to divide his time between India and Pakistan.

He explains, "My parents live alone in Islamabad. I am their only son. I've sisters. But, they are married and are away from home. So, I've to look after my parents. At present, I am here in India promoting Jaanisaar. There are offers for other films which I am considering. But, a lot depends on the way Jaanissar is accepted by the audience." Dealing with the mass adulation that Imran is privileged to would have been a problem if he were in a relationship.

"But, luckily or unluckily, there is no one. Woh kehte hain na, kabhi woh humein na mile kabhi hum unhe na miley waqt yun guzarta gaya. As for the fan attention, it was a great high initially. Now I am immune to it," says Imran without immodesty.

Imran is not daunted by the escalated tensions between the two nations. "My parents left a lot of their family in Uttar Pradesh when they left for Pakistan. They know what it means to lose your precious roots. In Pakistan, there is absolutely no hostility towards India. When you visit Islamabad, Lahore or any of the cities, you are greeted with dozens of billboards featuring smiling faces welcoming you, many of them Indian. We love Lataji and Ashaji's singing as much as you love Nusrat Fateh Ali Khan Saab and Mehdi Haasan. So what's the problem?"