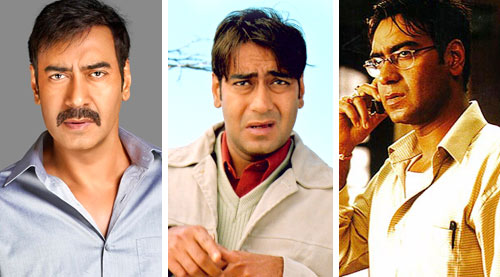 In Nishikant Kamat's Drishyam, Ajay Devgn abandons his macho Singham image to play a family man who gets brutally bullied and beaten up by the cops and doesn't retaliate

even once. Its risk for those who think Devgn means virile heroics. But, this is not the first time Ajay has abandoned his He-Man image to play the common man. Here's listing his roles where Devgn

has earlier crossed borders to be a hero of another kind.


1. Zakhm: Playing the wounded illegitimate son of a father who never gave his son, his moral and legal place, Devgn expressed all the hurt pain and anger without resorting to his

fists. The subtle performance won him the National award for best actor. Devgn's second National award was for The Legend Of Bhagat Singh where he played a super-hero of another dimension.

2. Humâ€¦Dil De Chuke Sanam: Ajay Devgn's most romantic character to date. He played the ideal husband, the Maryada Purushottam willing to hand over his newly-married wife to the

man she loves. He can't sing a line and yet he warbles 'Chingari koi bhadke' to win over his wife's singer-father. Again, this was risky territory for our macho Singham. Devgn loves


3. Dil Kya Kare: Prakash Jha's romantic mess of a movie about Ajay Devgn's adulterous past visiting his marriage to Mahima Chaudhary. Though an unremarkable film, again this film

showed Devgn's proclivity to resist the temptation of acting macho 24/7. He was tender and passionate in his scenes with Kajol who played his one-night-stand partner (in a train, if you please).

4. Raincoat: Rituparno Ghosh made only one film in Hindi. Bringing together Aishwarya Rai and Ajay Devgn, this was the quintessential chamber piece where Devgn played the drifter from

Bihar who comes looking for his lost love in Kolkata. Again, a performance stripped off all vanity, bravado and machismo.

flat, it did give Devgn another chance to prove his skills at playing against his image. Singham can cry, Saala!