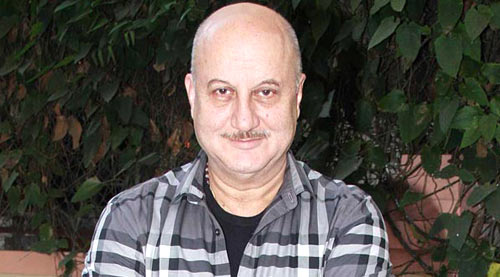 "It was historic, simply historic. I never expected this kind of support," said Anupam Kher about his protest march against the awards-vapsi campaign that's been undertaken by a section of litterateurs and filmmakers.

"I was outraged at the selective outrage being displayed by the so-called intelligentsia. When I decided to undertake that protest march on Saturday, I didn't think of the repercussions or how I'd look on television. I was ready to walk alone. I've always followed the lonely path from the time I played a 60-year old man in Saaransh when I was in my 20s. I never expected so many people to join me on Saturday. We had 15,000 people with us. It was historic."

Filmmakers Madhur Bhandarkar and Ashoke Pandit also flew in to Delhi to join Anupam in this unprecedented protest against the protesters.

Laughs Anupam, "Yes, that is what it was. A protest against protesters. I was discouraged from undertaking it by some well-wishers who felt token gestures such as candle vigils and protest marches hold no relevance. But I decided to take on the hypocritical token protests of authors and filmmakers with my own token protest. I never expected it would work so well."

Anupam says he was ready to take that walk alone if he had to.

"I was really not worried about who joined me for this march. If folks from the film fraternity come they were most welcome. People from all walks of life were welcome. But I was not taking this walk to protest in a mass group. This was my conviction and I was determined to stand by it alone."

Quips Anupam, "Some cynics are saying my decision to protest against the awards vapsi was for publicity. But if you look at the people who have returned their literary and film awards, you'll see most of them were forgotten until they made this noise about returning the awards. They are the ones who needed the publicity, not me."