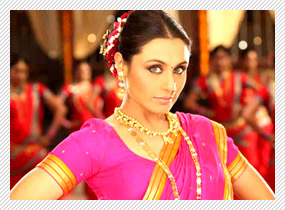 In real life she is a Bengali. However in Aiyyaa, Rani Mukerji is enacting the role of a hardcore Maharashtrian young woman. The film has a Marathi milieu to it and while the middle class set up is pretty much in your face, its director Sachin Kundalkar (again a Marathi) has ensured that the supporting cast is Marathi too. The same is reflected in the lingo as well as cultural aspects of the film, something that made Rani wonder whether she was a misfit in the scheme of things.

“I was comfortable playing a Marathi girl in Aiyyaa” – Rani Mukerji

Laughs Rani, "Sachin used to tell me that Aiyyaa would have this Marathi thing and that Marathi element to it. I just asked him one question that 'Bhai, teri picture ki sabse badi problem toh yeh hai ki central character play kare waali heroine hi Bengali hai! So how would you pull it off? Since he was being so particular about authenticity, I did wonder if me coming into the film would distort the balance."

This is when Sachin showed Rani, pictures of some Konkani girls who had similar looks and features as Rani.

"These girls too had 'bhoori' eyes and similar features as mine. Moreover Sachin assured me that my face did look Maharashtrian after all. Rest he wanted was for me to get the body language and the lingo right. I was comfortable with that since I have lived in Mumbai all my life. To physically turn into Meenakshi Deshpande (the character she plays in the film) wasn't as difficult."

She further worked upon her accent and was soon seen conversing as a Marathi with a distinct touch in her tone and words in the way she spoke Hindi as well as English in the film. No wonder, the director was happy as well since he could see his vision being translated into action for screen.

"Sachin told me that in his 'parivaar' he had seen many cousins of his who were suffocating in their married life since they couldn't pick and choose a groom of their choice. Aiyyaa touches upon this topic where a girl chooses her own groom. Though Sachin was picking this up as a issue, he was sure that the tale had to be light hearted. He wanted to break the stereotype where such subjects get into the preachy zone", Rani says.

Sachin further incorporated quite a few elements of his mother's life into the film and based Meenakshi Deshpande on that.

"Yes, Sachin comes from a middle class Marathi family and knows that whole culture out there. In a way he has been inspired by his mother's life. She lived on her own terms and I could relate to that because even my mother too is very different from others. Of course since this is a film, we have treated Aiyyaa in a very light hearted manner. This is the reason why you see me dancing and singing as well", she smiles.

While she is currently singing and dancing with Prithvi who is a newcomer in Bollywood, Rani has stayed on to be in touch with the three Khans who made a major contribution to her rise to the top. No wonder, she feels that her relationship with the trio of Shah Rukh, Salman and Aamir is pretty much for the keeps.

"Absolutely", she perks up here, "Kuch rishte aise hote hain jo dil se bante hain and they stay on to be genuine. I was a kid when I started in the industry and they were the ones who literally held my hand. I am sure hamaara rishta umar bhar tak rahega. When they would be celebrating their 80th year, I would be 64 year old and would still be clapping the loudest at the party!"

Well Rani, as long as audience gets to see you going totally 'bindaas' to the tune of 'Dreamum Wakeupum', they won't mind that.