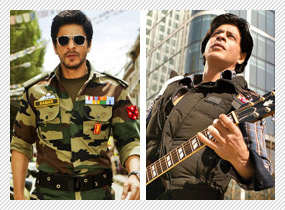 Is Shah Rukh Khan playing a double role in Jab Tak Hai Jaan? That's the speculation making rounds ever since the song 'Challa' went on air.

"All this while one was led to believe that Shah Rukh Khan is playing an Army man in the Yash Chopra film since he was being shown in a uniform. However in the song which has just been released, he is shown singing on the roads in a foreign land and also accepting money from the passer-bys. This totally discounts him being an Army man", comments an observer.

Moreover his look is also entirely different as a singer and the Army man. While in former he is carrying forward the Raj/Rahul legacy, in latter he is looking much dapper with some firm facial expressions.

"As of now there is immense intrigue building around what Shah Rukh is actually playing in the film. There is no clue around whether the film features Shah Rukh in a double role. However the very title Jab Tak Hai Jaan could well have a deeper meaning in the context of the film", adds another observer.

We tried contacting Yash Raj Films for the details but no one was available for comment.

On The Sets: Janhvi Kapoor looks thrilled as…

“We are all singers, the tag of female…