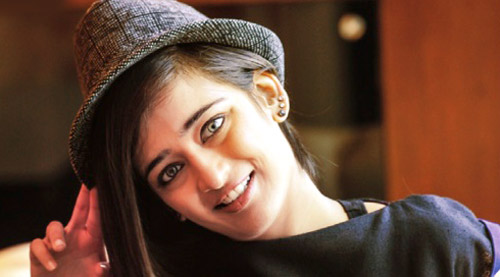 Kamal Haasan and Sarika's second-born Akshara Haasan is all set to make her acting debut in R Balki's Shamitabh. Here she tells Subhash K Jha what it means to be entering a world already inhabited by her parents and elder sister.


Akshara, what prompted you to become an actress?

I was earlier learning the ropes of filmmaking from Mr. Rahul Dholakia and many other ad filmmakers from Mumbai. I was fully focused on learning filmmaking. But acting was always there in my genes. In my subconscious I knew I'd be an actor one day. I didn't know when it'd happen.


Your father told me once that like him, you'd make your way from behind the camera to the front?

He was right. Acting was always a part of me. I think I decided about 2 Â½ years ago that I wanted to be an actor. So acting it is. This is what I want to do.

The response to your presence in the trailers of Shamitabh has been very positive?

Yes, and I am very thankful to everyone for the appreciation. To be honest I am surprised by the overwhelming response. Sure, I knew I'd be kindly received in the film industry. But the scale of appreciation is most unexpected. I am over the moon with the response.

Oh yes, I am most eager to do more films. Shamitabh has made me a hungry actor. I want to try out various characters. It doesn't matter which language it is. I just want to do good cinema.

In Shamitabh you had to share screen space with a legend like Mr Bachchan. Were you nervous?

From the start I knew I was the baby on the sets. Everyone mollycoddled me like their own child. I never dreamt I'd be able to share screen space with actors of the caliber of Mr Bachchan and Dhanush in my first film.

What was your reaction when you were offered a film with Mr Bachchan?

I was like, 'Oh my God! Are you serious?' I was immediately attracted to the script and the cast. Really, its an honour to be in a film like Shamitabh.

Mr Bachchan has praised you?

Yes, he did. It was one of my biggest moments. He was very helpful on the sets. All newcomers need their seniors to help them get used to the camera on the sets. To me it was a blessing to have a cast and crew which completely supported me. Every day I learnt something new on the sets from Balki Sir, Mr Bachchan and Dhanush. They made me feel so at home I didn't feel the nervous anxieties of a newcomer.

Did it help that Mr Bachchan and Dhanush have worked with your family members?

Every actor has to find her own equation with her co-actors no matter where she comes from. Mr Bachchan and Dhanush helped me establish my own equation with them. I was never treated like Kamal Haasan and Sarika's daughter or Shruti's sister on the sets. Those connections never came up. They saw as 'Akshara', an individual.

Did that please you?

Yes a lot. All these amazingly talented people saw me for whom I am and not for where I come from.

Please describe a typical day on the sets of Shamitabh?

If I got stuck in a scene or if I didn't understand, Balki Sir would patiently explain it took me until I got it right.

Your favourite films of your mom and dad?

My favourite film of mom is Parzania. And for Dad it's Hindustani. I am equally influenced by both, and yet I'd like to be known for myself. I connect with the variety of roles that they have done.

I can be honest with you. I confess I am a terrible singer. But I am trained dancer and I love dancing. I've been training for dancing for ten years.

Have you shown Shamitabh to your parents?

Not yet. I am really looking forward to my parents and my friends watching Shamitabh. I can't wait to know what they think of my performance.

Besides Big B which other actors would you like to work with?

Mr Shah Rukh Khan and Ms Deepika Padukone. I love her performances and she's such a darling in person.

Do you stay alone in Mumbai?

I live with my mom. I am a very independent-minded girl and she respects that. She has given both my sister and I the freedom to do what we want with our lives.

What would you be if not an actor?

I'd love to be an actor for the rest of my life. But I also love and photography.