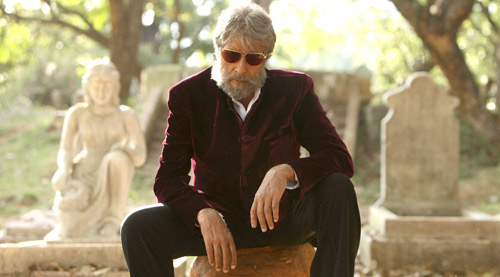 1. Amitabh Bachchan plays a cranky, churlish tantrum-throwing actor. To remain in character he was constantly in a bad mood while shooting.


2. The idea for Shamitabh came to Balki when he was stuck in the traffic while heading to the Bachchans' residence for Big B's 69th birthday bash.


3. Dhanush was the second choice for his character. Shah Rukh Khan was offered the role and in fact the film's title came from the acronym of Shah Rukh and Amitabh Bachchan. But SRK didn't work out. Sigh!


4. The formidable Kamal Hassan and Sarika's younger daughter Akshara Haasan was chosen out of a list of 76 hopefuls. Director Balki was looking for someone who was innocent and yet sensuous, spontaneous and seductive. Balki has never introduced any actor before.


6. Rekha makes a cameo appearance in the film as herself. Though Balki is not telling how and where, the super-diva appears insiders insist Rekha is part of a crucial episode of the plot.


7. Abhishek Bachchan has done a cameo appearance in the film. The story goes, he had come visiting his dad on the sets of Shamitabh and insisted on being part of a crowd scene. Says Abhishek, "It all started with Karan Johar's Kabhi Khushi Kabhie Gham where I sauntered into a shot. Karan edited me out. I played a character in Salaam Namaste, Neal 'N' Nikki, Ek Ajnabee and even Home Delivery where I was barely visible for a few seconds. All these small characters were played for the sake of dear friends."


9. This is Balki's third feature film, and his third with Amitabh Bachchan and music composer Ilayaraja. It's unlikely Balki would make a film without Bachchan Saab or Ilayaraja Sir in the near future.


10. Shamitabh is the first Indian film to be shot in Lapland, Helsinski. It was so freezing cold the camera lenses had frozen ice on them. One more reason for Mr. Bachchan to remain in a bad mood during the making of the film.