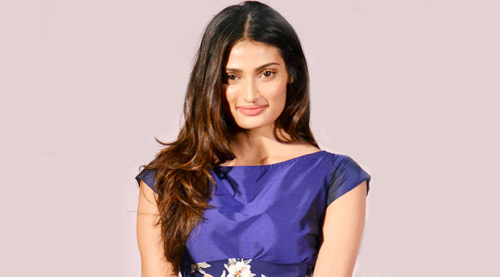 It's out. The suspense factor which accompanied the launch of star-kid Athiya Shetty has been uncovered. After being in the news for over a year, her debut film Hero has

finally released. While the reactions have started pouring in and the collections being gathered as well, for Athiya this has been a big moment indeed. Considering the kind of media attention that

she along with her leading man Sooraj Pancholi have enjoyed, especially during last couple of months, the Nikhil Advani directed film is nothing less than an acid test for the youngsters. Now that

the Salman Khan production has been unveiled, the real test begins.

Big moment, big day, time for everything out in open, isn't it?

Honestly, the days leading to the film's release made me really nervous. There were so many butterflies in the stomach. They still are in there. I am looking forward to the weekdays now. Fingers

Over the years, you must have seen your father's films getting released and him being nervous. Now are you able to relate to how he must have felt every Friday?

My dad's box office success or failure never came into the home. He never used to have any film related conversations that would affect our childhood. There was never any stress on any give Friday.

Just imagine, he has had 120 such Fridays in the last 20-25 years. Here we are so tired with just a few weeks of promotion and back then, he used to juggle two to three movies every day. Back then

I never understood what he was going through. Today I can relate to that to some extent though.

It has been almost a year since you started work on the film. How do you look back at the journey?

It's a very weird feeling. It was like I almost didn't want the film to be released. I still wanted to keep it close to my heart and let the whole feeling of making it seep in. Yes, there has been

a lot of buzz and positivity about the film which is overwhelming and humbling. Of course I feel blessed and happy. That said, I chose not to follow much on twitter or other social/online media

around the film, so I don't know whether everything leading to the film was truly 100% positive or there were some negative elements as well. However, I tend to believe that it is all positive, and

hopefully that would continue too (smiles).

As actor, how do you see has been your growth from the time you gave your first shot to the point where you ended your dubbing?

As an actress I can't judge myself or my work. I would let people see that. Yes, on a personal level I feel much more confident. I think I have changed in that sense. However, everything else is

just the same. I am still as nervous and anxious as I was on the first day of my shoot. Frankly, I have not even taken a toe inside the industry, let aside a foot. There is so much to do.

When the film came to you, it was clear that Salman Khan would be there as a producer to launch you. However, you must have been particular about who directs you as well, isn't it?

I had complete faith and trust in Salman sir. In any case, I knew that he won't venture into anything unless he is 110% sure of what he wants and then gets results that are 110% too. We knew that

he would get someone really good on board. Now that in my very first film I have got to work with a powerhouse director like Nikhil (Advani), there couldn't have been anything better. He has tried

all genres of films, be it action, romance, comedy or romcom. He is very versatile filmmaker. I was very happy to work with him since he is an amazing mentor. He is not just a director for me; he

is also the calming factor in my life.

Since Nikhil has primarily worked with established actors like Salman Khan, Shah Rukh Khan, Akshay Kumar and others, it must have been thrilling to work as a newcomer with him, right?

It started during the workshops stage itself. He began to understand my strengths and weaknesses. Today, he knows me inside out. Especially when it is your first film, you have to show complete

trust and faith in your director. This is where Nikhil is so protective as he treats you like a baby. Even on days when we were not together, he would call or message to know how our day went. That

For a newcomer, it is always a bonus to be launched with a musical romantic entertainer. That must have been a comforting factor for you?

What attracted me most to the script was my character Radha and how it unfolds in the film. The manner in which she goes through an emotional graph or learns from her mistakes is detailed quite

So what happens next?

Honestly, no plans at least for next few days. I am too nervous in any case. I just want to go with the flow and see how the weekdays progress.