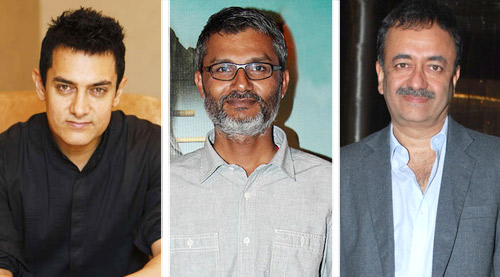 "Shooting for Dangal will start in and around Ludhiana from September 22," said Aamir Khan at a press conference in Ludhiana yesterday September 14. Aamir also cleared the air by admitting that Television actress Sakshi Tanvar will indeed play his wife in the film and four new girls will portray as his daughters in the film. Dangal, directed by Nitesh Tiwari is a film based on the life of wrestler Mahavir Singh Phogat who trained his two daughters Geeta and Babita, who later did him proud by winning medals at the Commonwealth Games in 2010.

Mahavir Singh Phogat and his two daughters also appeared in Aamir Khan's show Satyamev Jayate. Director Nitesh Tiwari said that he was narrated a two line story by a friend at Disney (co producers of the film) which he really liked and developed it further. "Nitesh has written a wonderful story. The topic is very important, it's very dramatic. It highlights the discrimination that is meted out to the girl child in India. The best part is that he has done it in a very entertaining manner. The heart of the story is emotional, but it also has a lot of humour. Raju Hirani has this unique way to tell a story where he says something socially very relevant but he tells his story in a very entertaining manner. Similarly Nitesh has written a very entertaining lovely script, the dialogues are very entertaining. Each time I listen to the dialogues, I laugh a lot. I cry as well as laugh," Aamir Khan said.

Aamir stated that his normal weight is 68-70 kgs but for Dangal he gained almost 30 kgs. "Currently I am weighing 95 kgs. I shall be portraying the stage from 45 to 55 years. After that I will take a break of 5 months, get back to my usual weight of 68-70 kgs and get into the Dhoom 3 mode to play the younger version for which we will shoot for around 15 days. For being a wrestler, it's not about being fit. It is about explosive speed, a wrestler has to be like a cheetah," Aamir said. On being asked how challenging it is to undergo such drastic physical changes and if it affects his health, Aamir replied, "I am film motivated. I do whatever is needed for a film. In Ghajini I had to build a big physique, lose all muscle for 3 idiots, and for Dangal I have actually put on weight, I have actually become fat. The process of losing that will be a big challenge. Health does get affected. I have gained 30 kgs in six months and then I will lose weight in five months." Wife Kiran Rao said that she still doesn't know what the real look of Aamir is because the moment he's out of one character he gets into another one.

Dangal will be shot in and around Ludhiana, Pune, Delhi and some parts in Mumbai. Nitesh Tiwari visited 20-25 villages in Ludhiana to opt for his location but finally he zeroed in on Ludhiana in Punjab as it suited the story in a best possible manner. Employment will be given to locals who will be working in the film. Aamir Khan has had threats from Khap Panchayat in the past because of Satyamev Jayate and that maybe one of the reasons why the producers didn't opt for Haryana. In an uncharacteristic manner, Aamir avoided any political questions. When asked about Beef ban in Maharashtra, Aamir requested to speak about the film. On the FTII issue, he gave a studied answer by stating that hopefully the Government will listen to the pleas of the students. When asked about the growing India-Pakistan tensions, Aamir guardedly said, "We are all human beings. I don't have any demarcation. When we are neighbours we should stay united. Mostly it is politically motivated. Politicians from both sides generally don't want us to stay united."