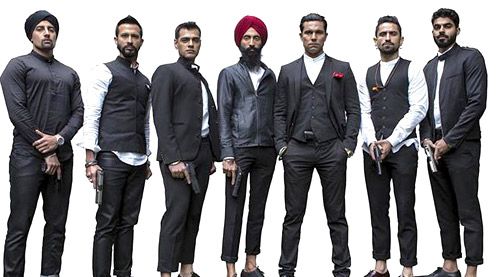 When the promo of Beeba Boys was unveiled a few weeks ago, I was fascinated by two factors - a) It seemed really exciting and stylish with a new take on gangster affairs from Deepa Mehta and b) It featured Randeep Hooda in the lead and there was a promise of the talented actor getting his due. Since the film has an Indo-Canadian gang war set up, it really seemed like an enticing and thrilling affair in the offering.

Alas, it turned out to be nowhere close to all the expectations that one carried from the film. Instead, it came across as a clichÃ©d, boring, sleep inducing and - I am afraid to say - a rather amateurish attempt at bringing to screen a crime drama. Considering the fact that it has Deepa Mehta at the helm of affairs, one expected better. That said, she is also the woman behind that atrocious Preity Zinta film Videsh - Heaven on Earth, and hence the shock quotient wasn't really all time high with Beeba Boys. I have suffered worse!

Bollywood as an industry has churned out numerous buddy gangster flicks. If Once Upon Ay Time In Mumbaai and Company (both starring Ajay Devgn) stay on to be masterpieces in this genre, Sanjay Gupta's Kaante redefined the word 'cool' when it came to films belonging to this genre. As for Hollywood and other films coming from the West, gangster films are a genre in itself. Hence, for Deepa to actually touch upon this territory and actually make something truly entertaining, different and exciting, it was always going to be a task in itself.

What happens in the process is that Beeba Boys has a focus on Sikh community which becomes a little too blatant after a while. One wonders if some of these elements could possibly make the hardliners raise a few questions but the fact remains that even without that, the film fails at a whole. Right from the start when a Quentin Tarantino narrative style is (unsuccessfully) attempted to brief shades of Guy Ritchie that are thrown in (while bringing to fore Randeep's heroic swagger), there is this wannabe feel that seeps into the narrative that works occasionally but doesn't elevate the proceedings to being interesting enough.

As a result, even though Randeep does impress from the scene one and has that smirk work wonderfully for his arrogant characterization, one wonders why Deepa doesn't go all out in making Beeba Boys entirely his own. Milan Luthria did so wonderfully well with Ajay Devgn in Once Upon Ay Time In Mumbaai while Sanjay Gupta made sure that audience looked at no one else but Sanjay Dutt in his countless gangster affairs. However, there is a plethora of characters brought into Beeba Boys and unfortunately, while they eat up a lot of screen time, when it comes to their relevance that that is pretty feeble. Randeep, despite doing well, misses out on that perfect presentation!

For starters, Randeep has a bunch of young gangsters (termed as Beeba Boys) working as all around him and except for Waris Ahluwalia (playing Manny), no one else manages to register even an iota of presence. Newcomer Ali Momen gets to play a really important part of Nep who is a connecting point between Randeep and his arch rival Gulshan Grover. However, such is the kind of (lack of) impact he has on screen that it is only mid-way through the film that you realize he is an integral part of the narrative, and not just an add-on.

Worse is reserved for the leading lady Sarah Allen. With absolutely no character graph whatsoever, she comes into Randeep's life, gets all confused with her place in there in quick time, and then sees a culmination to her character that again solves no purpose. As for the other women in the film, Gia Sandhu and Monika Deol (playing Ali and Gulshan's love interest), the less said the better. In fact the only woman who makes sure that you are indeed glued to the screen whenever she appears is veteran actress Balinder Johal. She is a powerhouse on screen and a woman who knows her kids more than others.

Unfortunately, the woman who (seemingly) doesn't really know her characters is Deepa Mehta herself - or at least this is how it all comes across on screen. It could well be a case of lost-in-translation as nothing on screen compliments the subject material that she had in hands to make an authentic gangster affair. May be the only thing she picked up from the genre are the cuss words that fill up the dialogues!

Or are these words THE dialogues, as it turns out to be the case right through the 100 minute affairs? Guess how would Mr. Pahlaj Nihalani react, if at all the film indeed appears in front of the Indian Censor Board!