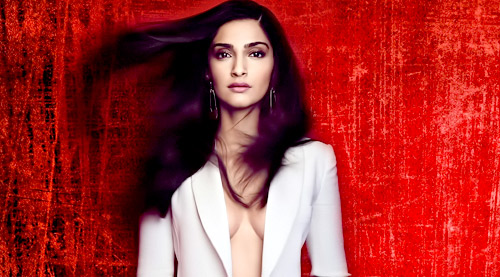 "It's fine, if you can keep people wanting more. There is a reason I did Bhaag Milkha Bhaag and the Coldplay video; I wanted to be a part of something," said Sonam

Kapoor in a Bollywood Hungama exclusive video interview with Faridoon Shahryar. "Yeah I've worked so hard to be a prop over here, so I didn't mean it in a derogatory way what I meant was if

I get a good role with a good role I don't mind doing it even in Chinese," Sonam clarified on her recent statement where she said that she doesn't want to do Hollywood films just to fit into the

bracket of hot Indian girl in a Hollywood film. Sonam also talks about why she's taking it slow and what her next move is going to be.

You tend to take a stand at many occasions in your personal life. When you do a movie like Neerja it looks far more real because one can relate to that character

But like a couple of people know that. Faridoon it's like for example you know me, couple of sections of the media know me. And a couple of fans know me on social media and all. But I feel the film

has reached other people also who might not know like about certain things I speak about. What I just felt is the values that this film stood for that people kind of connected with and I feel

Neerja's story is so relevant even today because it's about humanity, it's about insaniyat and I feel that's something people are gravitating towards. So it was that also and obviously it's the

way the film has been presented by the director, by the producer, by the way PR and the marketing has been done, it's been done in a very elegant and real way and people are realizing we are not

In a very quick time it's been declared tax free in Delhi, Gujarat, Maharashtra, Chhattisgarh, UP, do you feel somewhere happy with the fact that government has taken very prompt action

Because she is an Indian hero

Right, but you know Airlift took much more time for being declared tax-free, somewhere it helps the movie industry as well that if you declare a movie like this tax-free, it surely comes

A lot of people don't believe in tax, I am a huge believer in it. I feel it's like when you live in a building and you live in a community, you need to pay for the upkeep of something. Somethings

might be fair somethings might not be fair; this is your job and your duty. But sometimes films like Neerja which are inspirational to the youth and which talk about an Indian girl who was a

recipient of the Ashok Chakra. I mean this is a film about Indian hero and it's just an incentive for young people and Indian people to watch the film to talk about their unsung hero and I guess

people are recognizing that. So some films which are for entertainment and commercial purposes and stuff like that, it's okay to get taxed on. It depends, I think it is okay.

We spoke to Akshay Kumar recently and he said as far as entertainment tax is concerned maybe it's bit on a higher side and it affects the business of movies.

That's a different discussion altogether whether it's high or low or whatever. But tax is important.

Tax is absolutely important but maybe it should be rationalized.

That is a different argument, and there are lots of things which you can talk about, discuss and criticize. Yesterday was budget; this is a very hot topic right now, the Oscars and the budget. One

is very relevant to our lives; that's a different discussion. I wish I had studied economics and studied what's going on to give a proper analysis and understanding of it but I don't understand it

so I don't think it would be fair of me to comment on it.

You were asked recently that would you like to do Hollywood movies and you said that you don't want to be the hot Indian girl there.

Yeah I've worked so hard not to be a prop over here, so I didn't mean it in a derogatory way what I meant was if I get a good role with a good script I don't mind doing it even in Chinese. So it's

fine if it's English, Chinese, Telegu, Tamil, and Hindi. If it's a great role, like a role of a lifetime, I'll do it in any language.

There is a bit of criticism that you look stunning in that and people wanted more of you.

It's fine, if you can keep people wanting more. There is a reason I did Bhaag Milkha Bhaag and 'Coldplay' video; I wanted to be a part of something. I admired people involved with it.

How is Mr. Kapoor taking the success of Neerja?

Acha! He has. But what is his reaction, I spoke to him couple of months back, he said that the Fox Bosses in US had showed him some portions in US and they are very bullish about it, they are

very excited about it.

Yeah, he's... I don't know. He's my Dad; he's going to like everything I do. My mom is also very proud of me, but now she's like come on you need to like clean your room. She's like you're an

actress in the outside world, come here live in my house with my rules, clean the room your room is a mess. I haven't clean the house for like two months, like properly, so everything is very

disorganized. So she was very happy and very proud of me, but after a while she was like clean your room.

Why it's that you've not signed anything, you were supposed to do Battle of Bitora as well.

Depends I have to get ready, nothing is ready right now.

You want to take you time.

No I've always taken my time, I mean it has just so happened when you were interviewing me for Prem Ratan Dhan Payo and Neerja was already happening. It's been 8 years in the industry

this November, it's gonna be 9 years end of this year and I've done 12 films. Look at the average. It's like a film and half a year. So ek film ho gaya na iss saal? (Laughs!).

But there are expectations from you.

No it's fine. I've always had expectations; I am Anil Kapoor's daughter.

But after Neerja there will be different sort of expectations.