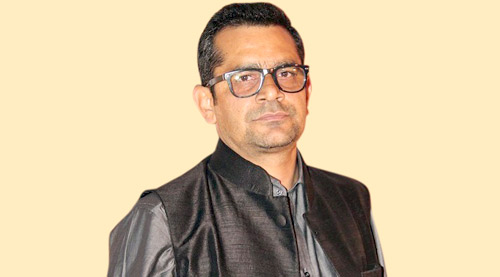 Two years after Jolly LLB (2013), a courtroom drama, filmmaker Subhash Kapoor is back with Guddu Rangeela. While both of his films so far, Jolly LLB as well as Phas Gaye Re Obama, have been peppered with quite a few humorous moments, Guddu Rangeela has been showcased rightly as a fun entertainer with good dose of action and drama thrown in as well. Though the film has a Khap Panchayat backdrop to it and the killings that follow, one pretty much expects the combo of Subhash Kapoor and Arshad Warsi to keep the entertainment quotient high with several fun moments. We get into a chat with the man.

You seem to have fixation with kidnapping. Phas Gaye Re Obama was about kidnapping, and now Guddu Rangeela too has that as a central theme.
(Laughs) Well, I don't have a kidnapping mindset. What attracts me is the milieu of North India. I like revisiting Western UP, Haryana, Delhi, Rajasthan and their interiors. What excites me are the characters you find there. Pehle yeh itna films mein nahi dikhte they but thankfully we are seeing them in Hindi cinema today. As for the kidnapping theme then perhaps that could have been sub consciously in my mind. I am not a right person to pin point on where it comes from. However, in comparison to the suited booted NRI characters that we often see in films, I am more excited by marginalized characters who are funny rascals.

No wonder, you picked Arshad who has a knack for playing such characters, be it Babban (Ishqiya) or Fauji (Zila Ghaziabad). So has he raised the bar further with the film?
I won't say that I am presenting him in a milieu like never before. Babban is one of the finest characters played by Arshad. If one looks for some memorable parts he has played, the names that come to mind are Circuit (Munnabhai series), Babban (Ishqiya series) or Jolly; these are outstanding characters. Now in Guddu Rangeela, he is playing a part that one normally doesn't expect from him. There is seriousness and maturity in his characterization. While Guddu (Amit Sadh) is funnier and seen cracking jokes, Rangeela (Arshad) is more mature. There are a lot of things deep down in his mind. He is very calculative.

I hear that even the victim in your film, Aditi Rao Hydari, is quite calculative, even though her character so far has been projected as quite vulnerable and innocent. Correct?
(Smiles) Well, it is for a reason that we have not given much about Aditi's character in the promo. Reason for that is that whatever happens to Guddu and Rangeela, it is her character of Baby which drives the show as a ring master. She is the one who controls it all. We had to cast someone who looked like the character she is, even though she is required to be quite 'tedha'. I thought that she would be perfectly right to play Baby. I didn't want an obvious choice for the part as there is a lot that is happening behind the pretty vulnerable face that you see on screen.