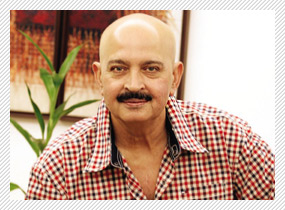 Actor, producer and director Rakesh Roshan has donned all hats with equal aplomb. In a candid interview, he sums up his 40 years in showbiz the journey from Sunghursh to Krrish 3, working with superstar son Hrithik Roshan, hits, misses and more

How did you get started in the film industry?

I joined H.S. Rawail for Sunghursh with Dilip Kumar and then Anjaana starring Rajendra Kumar and Babita. From there I got my break as an actor. As an actor, I always felt I could do better but I wasn't getting good roles.

So you cut short an acting career and turned to producing films?

Eventually it's the producer that matters the most in the scheme of things, so slowly I switched over producing Aap Ke Deewane, Kaamchor and Bhagwan Dada and it was then that I realized that it is the director who holds the key to the film (laughs). Khudgarz was my first film as a director and then came Khoon Bhari Maang, Kishen Kanhaiya, King Uncle, Karan Arjun, Koyla, Kaho Naa... Pyaar Hai, Koi Mil Gaya, Krrish and now Krrish 3.

As a producer, you certainly would have been more involved than merely bankrolling the films?

When I was producing films, I would sit in on edits and script sessions so I learnt about it. For my first film as director, I went to Rajinikanth who had acted in Bhagwan Dada but he was busy with Uttar Dakshin. I then approached Kamal Haasan but he refused, so I was a bit dejected. Then I saw Dost starring Shatrughan Sinha and Dharmendra. I liked him and I thought he would be best suited to play a Bihar babu and so I changed the story. Jeetendra was a good friend, so he agreed and Shatru said yes too, but I told him not to come late on the sets as it was my first film! He kept his word and stuck to the time that he had agreed to as reporting time -11 am.

What gave you the idea to then direct a heroine dominated film in the urban milieu? Also what made you choose Rekha and model Sonu Walia for the parts they played?

I wanted to make a heroine oriented film and so came Khoon Bhari Maang. Khudgarz had done well so the distributers had faith in me. I chose Rekha because she would have been able to play both characters. The unglamorous mother and the glamorous fashionista. As for Sonu Walia, I just saw a few scenes from another film she was doing and decided to cast her. And both of them won awards that year!

Why did you follow this up with Karan Arjun, a reincarnation story about two brothers?

As a director-writer I have always tried new plotlines and customized it to suit the Indian audience. I wanted to make a reincarnation story, which till then more often than not were love stories, so I made it about two brothers and a mother instead! I put Raakhee as the main hook with the two brothers. In Kaho Naa... Pyaar Hai, people expected both Hrithik's characters to be brothers, but they were not.

What made you come up with an Indian version of ET- Koi Mil Gaya?

I took a huge risk with Koi Mil Gaya - nobody would have made such a film with his son. I started working on the script and things fell into place very fast, but with Krrish 3, it has taken me five years.

What are the advantages of having an in-house superstar, namely Hrithik Roshan?

The advantage of working with Hrithik is that I know him very well. If he has to walk a stretch, I know what his expressions will be. He also knows me well as a director and knows my expectations. When actors are not in sync with directors then things get a little shoddy. He started assisting me, so I knew where his heart lay. To his credit, Hrithik, in a very short span of time, has done films as different as Dhoom 2, Jodhaa Akbar, Guzaarish, Koi Mil Gaya, Krissh and Zindagi Na Milegi Dobara.

Yes, he was almost written off after he had a string of flops in the early phase of his career?

After the success of Kaho Na..., people started signing him up because he had delivered a huge hit. Those who had already signed him earlier started changing the script to match his starry status, and that went completely wrong. I was making Koi Mil Gaya and that seemed like the last hope. I was very confident that it would do well commercially. People were saying, 'Why is he making a film about a handicapped person?' but I did not change. I didn't try to cast him in the hero mould, that's why I had to go all out with special effects. I kept telling him not to worry and that it would work. I feel that a good actor will always bounce back.

Krissh 3 is a big film and I could only make it because of Hrithik, What we are doing is not regular stuff, so putting together a detailed storyboard before we began shooting was very important. We sometimes have differences of opinion but that's it.

What would you say of Hrithik's growth as an actor?

Hrithik is a more honest and seasoned actor. He always asks for one more shot which is always better than the last one.

In the age of homegrown superheroes, what is the challenge of helming a franchise like Krrish 3?

The good part is that in Krrish 3, I don't have to establish the character. I already did that in the first two parts. Hrithik is playing both father and son, and looks like a different person for each character. The shot division becomes very difficult as a result of this - I have to do all the shots of the older character first and the young one's later.

A make-up artist has been flown in from London. The film's duration is about two and a half hour and it has only three songs. I have knowingly put in elements, which a younger generation will understand.

After all these years, how would you describe yourself as a director/producer?

I am not short-tempered, impatient yes, but now after Krissh 3 which has taken three years, I have become more patient. I do get upset if an actor is late because my entire schedule goes haywire and creates a backlog. I have never worked with latecomers and I don't believe in the numbers game. It has to be a person's complete body of work.

How different is the atypical Hindi film producer from the new corporate producer?

Corporates and studios only look at profits, but if people want to come to watch the film you have made, obviously you still carry some value for the audience. I mortgaged my house to make Kaho Naa... Pyaar Hai, but when corporates approach me they come with a budget, they don't understand my vision. Having said that, the transparency they have brought in is good.

Increasingly, we are watching new stories and narrative structures in Hindi films, something that you have tried as well. Do you think old stories lend themselves well to adaptation for new audiences?

After Karan Arjun, I went wrong with Amrish Puri's character in Koyla because after DDLJ tastes had changed. He was no longer the villain we were used to seeing him as. The world is now a smaller place. Though we failed with Kites, the day is not far when Indian and foreign actors will work together.