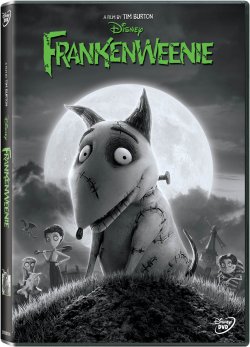 Disney's Frankenweenie directed by Tim Burton is a hilariously spooky black and white animation film and a tribute to the classic Frankenstein. It's a pity that the film didn't release in theatres in India because seeing this film in 3-D would have been an awesome experience. Nevertheless it's now out on DVD and certainly makes for entertaining viewing.

The story revolves around young Victor Frankenstein, a nerd, who is madly in love with his pet dog Sparky. A freak accident results in Sparky's death leaving poor Victor shattered. However when he sees his rather eccentric science professor bring back a dead creature to life by harnessing the power of electricity, Victor tries to do the impossible. Secretly late in the night he removes Sparky from his grave and tries to resurrect his pet dog using lightning from the sky. While he does succeed in his mission, things take a turn for the worse when the secret leaks out and other school kids also try the same experiment with their dead pets. What follows is a hilarious tale entertains and keeps you engrossed.

The USP of Frankenweenie lies in its clay animation which is simply outstanding. The animation is something you haven't seen often and does leave you mesmerized. However besides the animation Tim Burton narrates a heart-warming story of a boy's love for his pet-dog that is sure to touch a chord in your heart.

Frankenweenie is one of the cutest, funniest and most different animated films that you will ever see. Don't miss watching this hilariously spooky flick that is surely a front runner to bag the Oscar for Best Animated Film at the upcoming Academy Awards