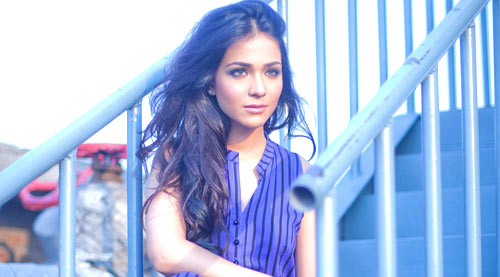 For someone who was widely recognized as an actress of substance after the release of Bol, the wait for Humaima Malick to be seen in a Bollywood flick finally got over with Raja Natwarlal. As Emraan Hashmi's love interest in the film, she is happy to be making a beginning in the industry. While she did get into a comfort zone with her co-star, also due to the fact that he is known to be inherently nice in the industry, has Humaima drawn a line for herself when it comes to being presented in a full-on glam avtar on the screen?

"See, there is always a line which you draw for yourself; you know how far you can actually go," says Humaima in a candid tone, "I know that I don't do things in a vulgar way. I am a subtle girl myself. I carry myself quite gracefully. I don't think that I can go to screen and do something ugly and vulgar. Mujhe maloom hai kikitna theek hai aur kitna nahi."

It is this very sense of assessment that worked well for all involved in Raja Natwarlal as well.

"When Kunal told me that he wanted an intimate scene in the film, I knew what he was looking for. He was also honest in expressing that there is a need of Emraan's audience too that has to be taken care of. Still, we never crossed the lines. This is the reason why this is Emraan's first family film and that too with a U/A certificate. Yes, we are being seen together in intimate scenes but then vulgarity, sensuality and sexuality mein faraq hota hai. I carry myself respectfully and that shows on screen," assures Humaima.

Meanwhile she is glad to have found Emraan as her first ever Bollywood co-star.

"Who ek aisa aadmi hai jo hamesha positive energy ke saath aata hai," says Humaima, "He doesn't come on the sets with a lot of baggage. That works for me as even I don't pretend to be somebody who I am not. Also, Emraan is a very shy person. He doesn't let himself out too often and also picks and chooses people very carefully with whom he wants to be friends him. I respect that trait of his. In all, he is very intelligent guy and a gem of a person. I am glad to have found a friend in him."

One looks forward to newer friends that Humaima explores in the industry, now that she has taken her first step in Bollywood.