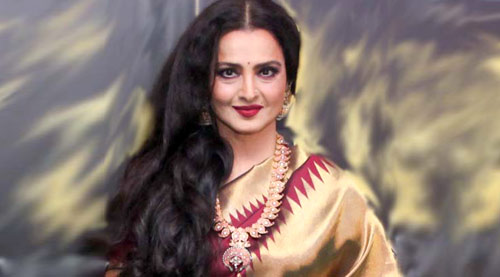 There are cinematic icons. And then there is Rekha. Ageless, timeless incandescent beauty, Rekha is the saving grace of Indra Kumar's Super Nani.


It's impossible to imagine any other Indian actress playing the role of the 60-plus grandmother who transforms into a super-model.


"That isn't true," says Rekha as we chat on life, music, cinema and beauty a day after her film released. "Dimple, Sridevi or Madhuri could have done the part. It is just your perception that the role was tailored for me. I took on the part because I loved the idea of a housewife who sublimates her own identity for her family, only to be taken for granted by her husband and children. It's a situation prevalent in households across the country in smaller cities and villages. That's the audience I wanted to reach out in this film."


The iconic actress feels she has made a connect with women at the grassroots with Super Nani. "The last time we reached out to that audience was when I did Phool Bane Angaaray. Earlier even Basu Bhattacharya's Astha had reached out to a very wide spectrum of women."


Astha became mired in a lot of controversy because of its volatile theme of a housewife moonlighting as a sex worker to buy herself the good things in life.


Rekha shrugs off the sensationalism saying, "Never mind why it succeeded. It at least paid off Basuda's bills when he was in hospital."


She is known to have a bleeding empathetic heart for people around her whom she comes in contact with. "I believe in being true to myself. I believe in being true to my work. I can't cheat on my performances. For me my films are like my babies. I nurture them and look after them like a mother. Main shooting mein ek din bhi naaga nahin kar sakti (I can't play truant from shooting even for a day). When I agree to do a film I am with it all the way."

Rekha never ceases to surprise. She reveals that she wore her mother's sarees in Super Nani. "I was playing a mother. And in doing so I wanted to bring in my own connectivity with my mother. I wore all her sarees in Super Nani. It did bring a bit of her amazing personality into my character, though I'd like to believe I have inherited a lot many other qualities of my mother than just her dress code."


Her fans and admirers were pleasantly surprised to see Rekha going all-out to promote Super Nani on television and through media interviews.


Sighs the super-diva, "I never hired a PR agency in my life, nor do I believe in promoting and marketing my films. But this time I felt my fans wanted me to reach out to them. There was this constant complaint that I was hardly visible, that I was locked away in my house away from prying eyes. Arrey, I am very happy doing my own thing. Besides gardening, I love to sketch and to sing."


Audiences got to see the iconic actress sing on Kapil Sharma's show.


She explains, "There was no grand plan to sing from before. It just happened. As I told you, I love to sing. I don't care whether I am fully in sur or not. It just comes from the heart."


Elaborating on the exceptional media interaction for Super Nani Rekha says, "They actually gave me a list of about 30 interviews that I was supposed to do. From these I chose a few. I spoke from my heart and left the rest to God."


She isn't sure if she'd do the same media interaction again. But what she will do is her own television show. "Yes, I am now looking seriously at doing my show. I've been toying with the idea for ten years. But now it's happening seriously. At the moment all I can tell you is that my TV show would be a reflection of my own personality .The only problem is the language. I am not as fluent in Hindi as I'd like to be. I think in English."

Remind her that her TV show needs to live up to the benchmark created by the Big B's Kaun Banega Crorepati and Rekha remonstrates, "That's a tall order. Even if I can draw up a creative stool and reach to that height I'd consider myself lucky."


36 years in the film industry and Rekhs is still iconized by generations of new actresses.


Says Rekha modestly, "I don't know what they see in me. Maybe I am the last of a certain group of actresses. I had so many actresses including Meena Kumari to look up to. Maybe the new generation of actresses have only poor little me to look up to."


She doesn't deny her iconic association with new generation of actresses. "Whether it Vidya Balan or Katrina Kaif they are all very beautiful, very talented actresses. I will be working with Katrina in my next film Fitoor. She's someone I've known from the time she's drop in to meet Salman who is my neighbour."


Speaking of Fitoor Rekha says, "I'll be busy with that from January to July with that. The director Abhishek Kapoor is a very talented boy. I am looking forward to seeing how he has interpreted the original novel (Charles Dickens' Great Expectations). I've done a screen adaptation like Khoon Bhari Maang before. It will be interesting to see where the director takes this adaptation."


Rekha also plans tell her own story in book form. "Yes, I've been writing down my thoughts.Not a memoir or autobiography. Just random jottings on life . I also do a lot of shair-o-shayari and these reflect my inner thoughts."