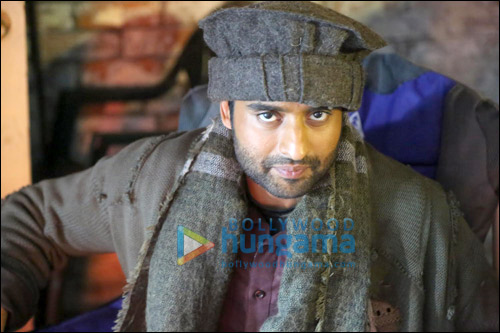 The first schedule of Welcome To Karachi has wrapped up in London. The story revolves around how the adventure duo (Jackky Bhagnani and Arshad Warsi) lands up in Karachi, Pakistan amidst the political conditions.


And recently we caught hold of the new look of the actors in the film. The otherwise glamorous and chocolate boy Jackky Bhagnani will be seen in a rugged look and sporting this Taliban outfit and on the other hand; Arshad dons a very suave look in his suit and shades.


The movie which had a lavish mahurat with the industry went through a lot of hurdles in its initial schedule while being shot in London. While shooting for the film in London, the shoot had to be halted after the lead actors Arshad Warsi and Jackky Bhagnani were mistaken as terrorists by the Scotland Yard. Both the actors and extras were required to shoot in Wales for a particular sequence dressed in Talibani outfits with guns in their hands. The crew was suddenly surrounded by Scotland Yard because of which the shoot had to be put on hold. Finally the misunderstanding was cleared off by Vashu Bhagnani after he produced the necessary documents.

After this incident, the crew yet again underwent a crisis when the film's lead Jackky met with an accident. It was a stunt where fighter Gita, and Jackky along with the gun curvy evacuation ended up hitting him accidentally on his hip bone with a dummy metal gun. He was in deep pain throughout the sequence but he went on to complete the shoot. Confirming the same, Jackky said, "Yes I met with an accident on the sets of the movie. In my line of work such incidents happen on the sets. But one should not be let down and work with utmost spirit and that's exactly what I did. We had that particular location only for a day and hence had to finish the shoot on the same day itself."


Produced under the banner of Pooja Entertainment, Welcome To Karachi is slated to release on April 10, 2015.