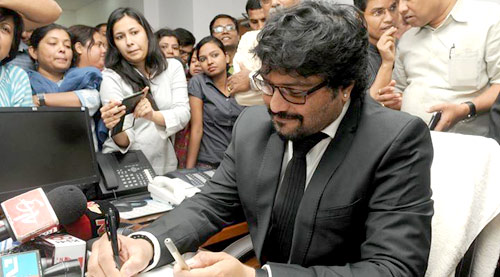 To everyone's surprise Bollywood singer and Bengali actor Babul Supriyo has been selected as the Minister of State for Urban Development, Housing and Urban Poverty Alleviation in the Narendra Modi government.


However Babul says he isn't surprised. "I keep my expectations within practical limits. I am happy to always let life surprise me. I was always sure that added responsibilities would come to me one day. If the honourable Prime Minister thinks I am ready for this huge responsibility then I am ready to give my best for the job he has chosen me for."


Babul is not willing to give up singing. And he has no need to, since according to the singer the Prime Minister Narendra Modi himself encourages Babu's singing.


Says the singer-turned-neta proudly, "Modiji himself inspired me to carry on with my singing. Music is to me what a charger is to a mobile. Besides, at the moment I'm a very happy man. Therefore I'll be able to sing much better than before. So who knows, this could be a new beginning for me as a singer."


At the same time Babul is aware that his new role as a BJP minister imposes certain curbs in his activities. "There are a few modalities involved in my new job, and my ministerial berth will surely bring in some constraints. I won't be able to perform at live shows anymore."


Babul is reconciled to the restraints now imposed on his life as an entertainer. "I know I won't be able to dance on stage anymore. But nothing should come in the way of my studio recordings. I'm sure I'll be able to balance out my role as a singer and a responsible cabinet minister, and I'll be able to abide by all the necessary rules and the protocol that I'm expected to follow."


Babul tries to conceal his bitterness about the way Bollywood treated his singing aspirations. "I used to be a very simple guy belonging to a music family from a small town. Mumbai has helped me grow as a person. I am glad that this city made me realize early enough whom to trust and whom not to trust."


Babul insinuates that given his new powerful role he will favour those who treated him well. "I know those in whose tea I need to add an extra spoon of sugar. As for those who wrote me off, I've no complaints against them. Both the people who encouraged and snubbed me helped me to grow. I am thankful to both."


Still reeling under the impact of the newly thrust responsibility of a cabinet minister Babul is not quite sure how to proceed in his new job. "I will take it one day at a time. To be elected alongside such stalwarts in the current government under the leadership of Modiji is no small achievement."


Babul is happy that all the veterans of the BJP government have accepted him. "They've been very loving and supportive. I aspire to learn governance fast and to learn well."