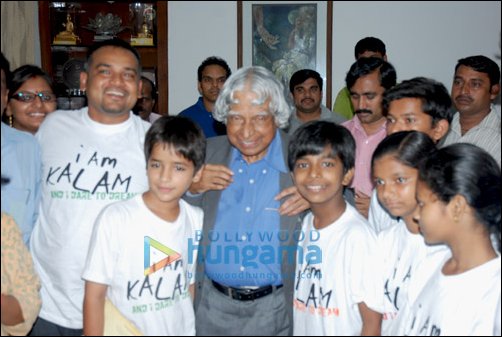 When the child-actor Harsh Mayar who plays the wannabe Abdul Kalam finally met the real Kalam at the latter's residence in Delhi on Thursday, sparks flew as the former President of India, a formidable educationist and a champion for literacy, wanted to know if Harsh has been attending his school regularly.


The question threw the otherwise market-savvy National-Award winning actor off course. The fact is, Mayar has been fairly busy marketing himself and the film I Am Kalam (in that order) at the cost of his schooling and education. Sitting the boy down gently, Dr. Kalam patiently impressed upon the boy the need for a proper formal and regular education. Movies, the former President explained to the boy, can come later.


It is to be noticed that like all child actors, Mayar seems to be dazzled with show world and has been giving clever quotes and sound-bytes to all the newspapers and channels. His recent widely-publicized trysts with celebrities including Amitabh Bachchan has not gone unnoticed by Dr. Kalam whose message of education for all children forms the backbone of the film.

Apparently, Dr. Kalam wanted to know how much time Harsh Mayar was devoting to the film's message of literacy and how much time into promoting the film rather than practicing the message.


Sounds like a cleverly worded sales pitch. When we ask the director Nila Madhab Panda of I Am Kalam about the child actor's premature media savvy, Panda laughs, "Harsh has become quite a star. He knows exactly what to say to the media to get attention. In fact he has become the face of the film, that's fine. I need to spread the film's message of literacy as far and wide as possible. I had to sell my house to make the film. My struggle to spread the message of child education has to be vindicated."


Luckily for Panda, the former President Of India loved the film and has promised every support.