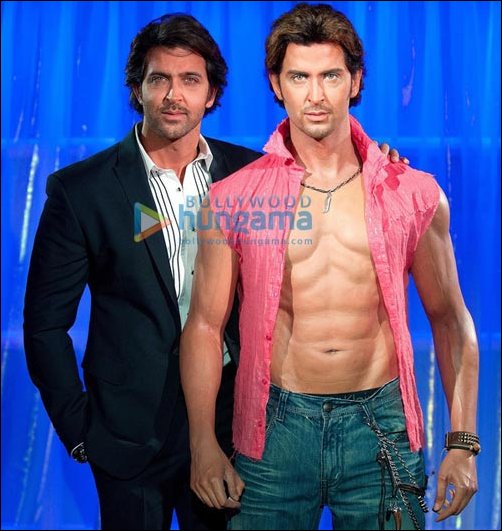 On meeting his double for the first time, Hrithik Roshan commented, "I can't believe I'm here in Madame Tussauds unveiling a wax figure of myself. It's incredible just how detailed the figure is - they've really captured my look. I'm truly honoured to be included and hope my fans will like seeing the figure".

What many don't know is the fact that Hrithik is the youngest male actor from India to be honoured by Madame Tussauds.

Roshan was completely involved in the creation of the figure - attending two sittings in Mumbai and London where the sculptors captured a catalogue of reference photographs and hundreds of precise measurements. Hrithik also donated the red shirt and dark blue jeans his figure is wearing.

The figure took four months to make at a cost of Â£150,000 and joins fellow Indian film stars Amitabh Bachchan, Aishwarya Rai, Shah Rukh Khan and Salman Khan in Madame Tussauds special Bollywood area. To coincide with the launch of Hrithik's new figure, the area has been given an update with an all new interactive touch screen where people can watch their favourite dance routine from five Bollywood icons.

Liz Edwards, Madame Tussauds - PR Manager commented, "We're delighted to welcome Hrithik (and his family) here today and to be including his figure in our Bollywood area. It is one of our most popular areas in the entire attraction and we know it's going to be even more so with Hrithik now featured in the line up. The pose is so striking, it is sure to wow fans and get ladies hearts a flutter. In fact it has got to be one of the most daring figures we have ever created".

January 20, 2010 is going to be more than just special for Hrithik Roshan and his family. But his fans out there, go queue up outside Baker Street Tube Station and get up close and personal with the man himself in Madame Tussauds.

Love him, hate him or wax him, you just can't ignore him!

Deepika Padukone thanks Hrithik Roshan for…