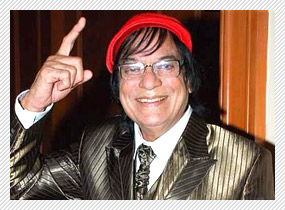 Bollywood's most popular comic actor's converge in producer Dheeraj Kumar's Safar Filmy Comedy Ka, which traces the evolution and trends of comedy across 100 years of India cinema. Divya Dutta, Satish Kaushik, Shakti Kapoor, Jagdeep and Rajpal Yadav among others, recall memorable and funny moments on and off the screen.

Jagdeep, who has worked in films like Qurbani, Shahenshah, China Gate, Andaz Apna Apna and other is synonymous with his role as Soorma Bhopali in Sholay. The character came into being when Jagdeep told screenplay writers Salim-Javed about a forest officer from Bhopal called Soorma. He even discussed the peculiarities of this person that were also incorporated in the film.


Interestingly, the real life Soorma from Bhopal met Salim (Khan) and Javed (Akhtar) and slapped a case on them as people began calling him a woodcutter because of the film, while in reality, he was a forest officer.

Actor and film-maker, Satish Kaushik worked in a textile mill when he came to Mumbai. While recalling his struggle in the film industry, he shared some behind-the-scenes moments of the cult hit Jaane Bhi Do Yaaron. Not many know that Kaushik as on board only as a co-writer. As he wrote the film, he even recorded the script and dialogues and improvised on them before the script was finalized. Director Kundan Shah was so impressed with the improvisation and Kaushik's acting that he decided to cast him in the film as well.

Kaushik, who worked as an associate director in Mr. India, revealed how his name, that of Calendar, came about for his role as Anil Kapoor's cook in the movie. Kaushik's father sold clocks in Rajasthan, and one of his dealers was called Calendar. When Mr. India was in its scripting stage, Kaushik mentioned the quirky name to Javed Akhtar (co-write of the film), who incorporated it in the story.

Kaushik also confesses that the get up of Muthuswamy, the character he essayed in Saajan Chale Sasural is his favourite.

Rajpal Yadav speaks about the comic on-screen Jodi that he loves watching in films. The actor confesses that his favourite Jodi is Sanjeev Kumar and Deven Verma in Angoor. He believes that a combination of action-reaction is essential for any Jodi to perform in comedy. Besides, this, he feels Anil Kapoor-Madhuri Dixit in Khel and Anil Kapoor-Sridevi in Mr. India complemented each other perfectly.

Prankster on the sets

Divya Dutta recollects the time when she could not stop laughing, that too while doing an emotional scene. She was shooting with Shah Rukh Khan and Preity Zinta in Veer Zaara and the shot required her to get up from the bed and walk towards Khan, but every time she did that the bed creaked, making her laugh. A couple of takes later, she decided to get serious and give the final take but this time when she got up from the bed, it stood up right behind her and the entire backdrop collapsed. The actor, however, continued to walk towards Shah Rukh, who, by now was laughing so uncontrollably that director Yash Chopra had to call for a break.

Another time, while shooting for Welcome To Sajjanpur, Dutta made a crank call to her co-star Shreyas Talpade. Using a man's voice, she introduced herself as Ramesh and insisted that Talpade give him an autograph for his wife and kept hankering the actor o meet them. It was only when Talpade narrated the entire sequence to the unit members during lunch hour that Dutta revealed the prank she had played on him.

Whose line is it anyway?

Remember the funny line - Main ek chhota sa, nanha sa, pyara sa bachcha hoon, which Shakti Kapoor constantly repeated in Chaalbaaz? The actor says that it was a line that he would often tell his wife Shivangi when she got upset with him. When Anupam Kher heard the line, he immediately mentioned it to director Pankaj Parashar, who liked it so much that he incorporated it in the film.

Another of the actor's iconic liner - Ankhen nikaalke gotiyan kheloonga, was borrowed from actor-film-maker Tinnu Anand, who was the first choice to play Goga in Andaaz Apna Apna. Date issues led to Kapoor replacing Anand in the film but director Rajkumar Santoshi, with Anand's permission, used it in his film.