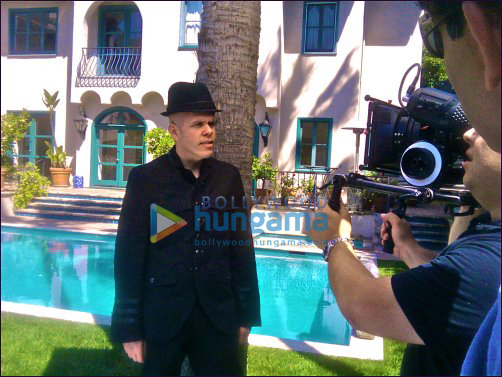 Perez Hilton has joined the cast of Himesh Reshammiya's first global film A * Is Killed which is reportedly based on the killing of Michael Jackson. For the uninitiated, Hilton is an American celebrity journalist who boasts of a following of over 3 million people on Twitter.

Arguably America's most influential celebrity authority and bestowed with the title of 'Queen of all Media', Hilton is sometimes also credited with partially attributing to Lady Gaga's rise to popular success in North America for his frequent and early support.

Confirms a source attached to French director Christophe Lenoir's A * Is Killed, "Yes, Hilton would feature in a cameo. On screen he would also be seen mouthing the lines that go as: "Justice will be served and the murder of the superstar will not be forgiven."

As someone mesmerized by the superstar who dies under mysterious circumstances, Himesh Reshammiya portrays the lead protagonist (an Indian musician) who goes by the name of Siddharth Patel. A thriller, the film is being produced by Arifilms.

Speculations about A * is Killed started gaining traction after a video teaser was shared on the social web. Perez Hilton tweeted about shooting for the film and is thrilled about making a cameo in the film. On the scene at the Beverly Hills film location, William Sees Keenan, also a development consultant on Ra.One, is said to have remarked that it was fun bringing Himesh from Bollywood and Perez from Hollywood together.

"The film is only expected to get bigger with more cast members spread across the globe coming together on the same platform. It is just a beginning as there are many more interesting announcements around the film waiting to me made", the source adds.

Well, we are waiting for sure!